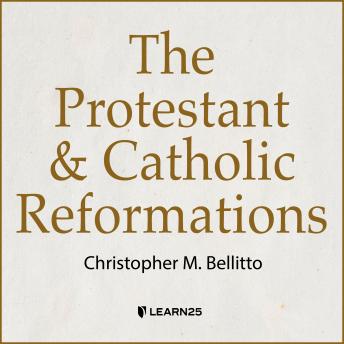 The Protestant and Catholic Reformations

Why are we so fascinated by the reformations?

The very word "reformation" is shrouded in conflict, bringing to mind new beginnings, partisan church politics, and the dawn of a modern world vision. Indeed, when you hear it, you probably think of a single event-Martin Luther posting The Ninety-Five Theses on the door of Castle Church in Wittenberg in 1517.

The truth, however, is much more nuanced-and interesting-than that. Join award-winning historian, Prof. Christopher M. Bellitto, PhD, in The Protestant and Catholic Reformations, a fascinating journey through Church history. Through 12 audio lectures, you will uncover multiple Protestant and Catholic reformations before and after Luther and the Council of Trent. You'll discover not only religious movements, but also the political, social, economic, and cultural contexts of centuries that changed the world.

You will start by looking at the reformations in a broad European and even global perspective. Next, you will follow the Roman Catholic Church as it faced the Avignon papacy and then the Great Western Schism, when two and then even three popes competed for supremacy. You will then explore the theological questions raised by such figures as Erasmus, Luther, John Calvin, and Henry VIII, looking at the variety of ensuing Protestant reforms. Finally, you will see how religious wars transformed Europe and how Roman Catholicism rebounded.

The Protestant and Catholic Reformations is an educational and entertaining course that will give you invaluable insight into the lessons and legacies of the reformations. You don't want to miss this exciting learning experience.