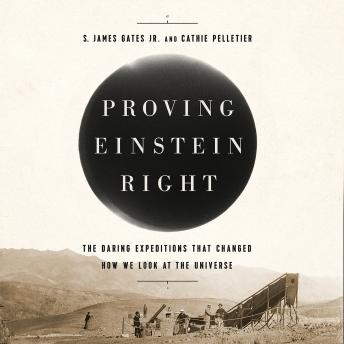 Proving Einstein Right: The Daring Expeditions that Changed How We Look at the Universe

A thrilling adventure story chronicling the perilous journey of the scientists who set out to prove the theory of relativity--the results of which catapulted Albert Einstein to fame and forever changed our understanding of the universe.

In 1911, a relatively unknown physicist named Albert Einstein published his preliminary theory of gravity. But it hadn't been tested. To do that, he needed a photograph of starlight as it passed the sun during a total solar eclipse. So began a nearly decade-long quest by seven determined astronomers from observatories in four countries, who traveled the world during five eclipses to capture the elusive sight. Over the years, they faced thunderstorms, the ravages of a world war, lost equipment, and local superstitions. Finally, in May of 1919, British expeditions to northern Brazil and the island of Príncipe managed to photograph the stars, confirming Einstein's theory.
At its heart, this is a story of frustration, faith, and ultimate victory--and of the scientists whose efforts helped build the framework for the big bang theory, catapulted Einstein to international fame, and shook the foundation of physics.

Proving Einstein Right: The Daring Expeditions that Changed How We Look at the Universe