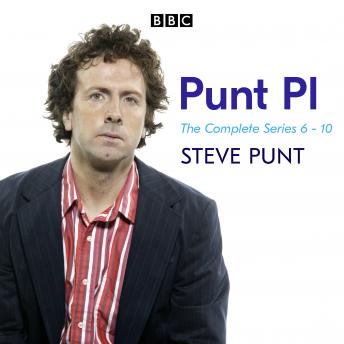 The BBC Radio 4 show where Steve Punt turns private investigator, examining little mysteries that perplex, amuse and beguile.
His methods may be unconventional but he gets the job done in this collection of all 18 epsiodes from series 6-10 of Punt PI.
Ranging from the bizarre to the macabre, he investigates the following tantalising cases:
Series 6:
The Case of the Vanishing Machine Gun Maker, The Holliwell Incident, Pitchfork Murder - Lower Quinton and Who Killed the Bears?
Series 7:
The Mysterious Death of Flying Millionaire Alfred Loewnstein, The Baker Street Bank Robbery, The Case of the MP Who Vanished and Who Put Bella in the Wych Elm?
Series 8:
The Murder of Hollywood Director William Desmond Taylor, The Case of the Missing Cezanne, and The Great Mull Air Mystery.
Series 9:
The Suspicious Death of Emile Zola, The Reclusive Skeleton of Fingringhoe and There's a Kind of Hum.
Series 10:
Lost Nukes, Treasure in the Piano, Missing Priest and Taking the Pissoir?