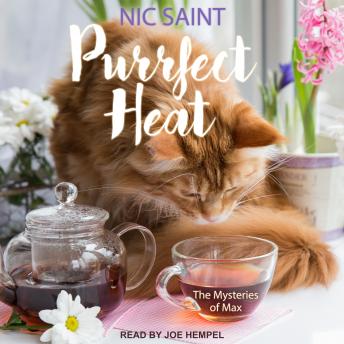 The peace and calm of Hampton Cove is brutally disturbed when celebrity chef Niklaus Skad, famous for his show Kitchen Disasters, is found cooked in his own oven. The chef wasn't a well-liked man, and there are plenty of suspects to go around. Odelia Poole, Hampton Cove Gazette reporter and civilian consultant to the police department, teams up with Detective Chase Kingsley to catch the killer, but soon finds this proves a lot harder than she thought.

Max, Odelia's blorange tabby, would love to help out, but is faced with a cat emergency when Odelia takes in a new stray. Diego soon proves to be a handful, and when he sets his sights on Harriet, it's war in the cat menagerie. With Dooley fearing he's contracted a wasting disease, and Brutus in a funk because Diego stole his girlfriend, Max has his hands full. Good thing he still has time to ferret out clues and chase suspects, or Odelia would never be able to crack the case. Will Diego become a permanent fixture in the Poole household? Will the celebrity chef's killer ever be found? And what's going on with Gran's crush on the mysterious Leo?