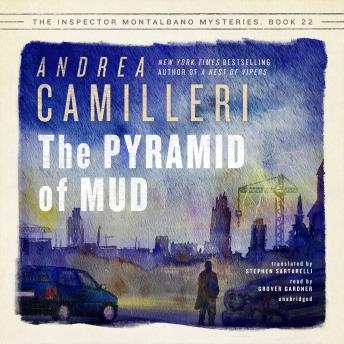 The Pyramid of Mud

#22 of The Inspector Montalbano Mysteries

This novel in the New York Times bestselling series has Italy’s favorite detective uncovering corruption and Mafia ties in the world of construction and public spending.

On a gloomy morning in Vigàta, a call from Fazio rouses Inspector Montalbano from a nightmare. A man called Giugiù Nicotra has been found dead in the skeletal workings of a construction site, a place now entombed by a sea of mud from recent days of rain and floods. Shot in the back, he had fled into a water supply system tunnel. The investigation gets off to a slow start, but all the evidence points to the world of construction and public contracts, a world just as slimy and impenetrable as mud.

As he wades through a world in which construction firms and public officials thrive, Montalbano is obsessed by one thought: that by going to die in the tunnel, Nicotra had been trying to communicate something.