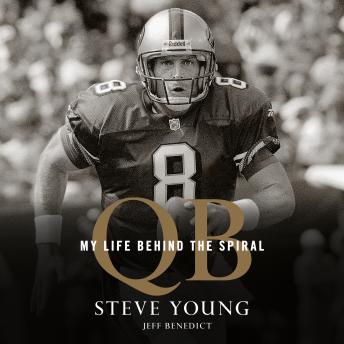 STEVE YOUNG produced some of the most memorable moments in NFL history. The Run-his electrifying 49-yard game-winning touchdown against Minnesota. The Catch II-his last-second touchdown strike to Terrell Owens to beat Green Bay in the playoffs. Then there were his record-setting six touchdown passes in Super Bowl XXIX.

But Young's most impressive victories were personal ones that were won off the field when no one was watching. QB is a remarkably revealing memoir of an athletically gifted Mormon boy with a 4.0 GPA, a photographic memory, and a severe case of childhood separation anxiety. At the same time, Young was absolutely fearless-and unstoppable-whenever he had a ball in his hands.

As an eighth-string quarterback at BYU, Young persevered through homesickness and a coach who said he'd never make it as a quarterback because he was a lefty who couldn't throw. Determined to prove his coach wrong, Young became an All-American, finished second in the Heisman voting, and was the top draft choice coming out of college. After signing the largest contract in sports history, he was so overwhelmed by impossible expectations that he nearly walked away from football to become a lawyer. Instead, he ended up in San Francisco, pitted against Joe Montana in what became the greatest quarterback controversy in league history.

Young's quest-both in football and in life-was always more about grit than anything else. His "get it done" mentality brought MVP awards and Super Bowl championships to San Francisco. As an author, he gives readers the sense of being inside his helmet while he runs through opponents both on and off the field.