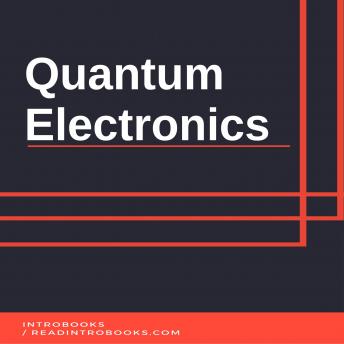 Quantum Electronics is that discipline of Physics which deals with the impact of quantum mechanics on the specific behavior of electrons in elements or that of any matter. To get an in depth understanding of the quantum electronics as a whole, it is required that atomic physics, which studies and explains the inner workings of atoms in matter, has to be understood very well. Atomic Physics is widely acclaimed as the most active of the testing grounds of the quantum theory and is rightly the field of extensive research for both its contribution to quantum electronics and technology in general, as well as for its contribution to all physics fundamentally. Not only quantum electronics, but a plethora of other disciplines are heavily indebted to Atomic Physics in that regard, some of them are quantum chemistry, astrophysics, solid-state physics, laser physics etc. According to one of the greatest pioneers of quantum mechanics, Mr. Feynman, if for some reason, all the information regarding science that is known to man today has to go except only one sentence that could be passed on to the next generation of creatures, then the most important of all information to fit into that one sentence would be the idea of atoms or atomic hypothesis / fact, whichever you want to call it - that describes little particles that are under constant movement and attracting each other if apart and repelling each other when squeezed- With a little bit of thinking and imagination applied to that one sentence, one can easily observe the huge information as well as the great evaluation made about our world! The primary task of Atomic Physics is to determine the wave functions as well as the energies emitted out of the quantized electron, leaving everything else related to the nucleus is left to Nuclear Physics to determine. So, for concept building we need to put stress on the basics of atomic physics before moving on the applications of Quantum Electronics.