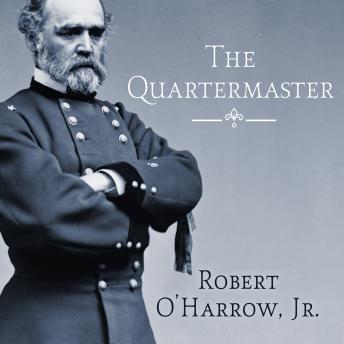 Born to a well to do, connected family in 1816, Montgomery C. Meigs graduated from West Point as an engineer. He helped build America's forts and served under Lt. Robert E. Lee to make navigation improvements on the Mississippi River. As a young man, he designed the Washington aqueducts in a city where people were dying from contaminated water. He built the spectacular wings and the massive dome of the brand new US Capitol.

Introduced to President Lincoln by Secretary of State William Seward, Meigs became Lincoln's Quartermaster. It was during the Civil War that Meigs became a national hero. He commanded Ulysses S. Grant's base of supplies that made Union victories possible. He sustained Sherman's army in Georgia, and the March to the Sea. After the war, Meigs built Arlington Cemetery.

Robert O'Harrow Jr. brings Meigs alive in the commanding and intensely personal Quartermaster. We get to know this major military figure that Lincoln and his Cabinet and Generals called the key to victory and learn how he fed, clothed, and armed the Union Army using his ingenuity and devotion. O'Harrow tells the full dramatic story of this fierce, loyal, forward-thinking, major American figure.