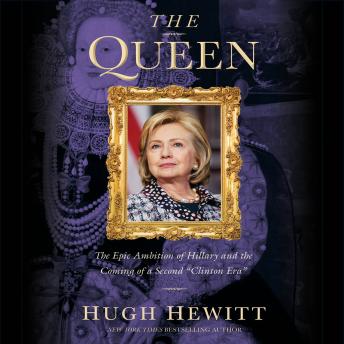 The Queen: The Epic Ambition of Hillary and the Coming of a Second 'Clinton Era'

National broadcast journalist Hugh Hewitt warns how a Clinton 'reign' would damage the fundamental, foundational traditions upon which America is built.
In THE QUEEN, Hugh Hewitt's in-depth examination of the career and accomplishments -epic failures, really- of the real Hillary Clinton will show you why-after her decades of working so hard, after surviving Bill and his antics, after losing to an upstart in 2008, submerging her boiling anger and wounded pride, and after enduring the real predations of the 'vast right-wing conspiracy' that has been dogging her throughout-Hillary is on the brink of achieving it all as the 2016 Democratic Presidential Nominee.
Not since the publication of The Prince by Niccolo Machiavelli 500 years ago has a member of the political opposition written so candidly about the strengths and weaknesses of the strongest member of his opposing political party.
Brilliant and insightful, THE QUEEN is simply unique among political books of our era.