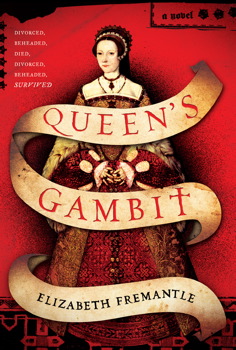 “Smart, sensual, and suspenseful as a thriller, Queen’s Gambit is a must-read for Philippa Gregory fans—and heralds a brilliant new player in the court of royal fiction.” —People

Widowed for the second time at age thirty-one, Katherine Parr falls deeply for the dashing courtier Thomas Seymour and hopes at last to marry for love. Instead, she attracts the amorous attentions of the ailing, egotistical, and dangerously powerful Henry VIII. No one is in a position to refuse a royal proposal. Haunted by the fates of his previous wives—two executions, two annulments, one death in childbirth—Katherine must wed Henry and rely on her wits and the help of her loyal servant Dot to survive the treacherous pitfalls of life as Henry’s queen. Yet as she treads the razor’s edge of court intrigue, she never quite gives up on love.