R is for Ricochet 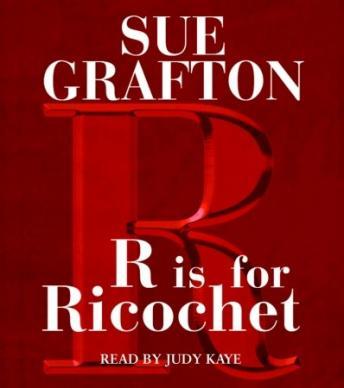 R Is for Ricochet is another thrilling installment in Sue Grafton’s Kinsey Millhone series.

Reba Lafferty was a daughter of privilege, the only child of an adoring father. Over the years, he quietly settled her many scrapes with the law, but he wasn’t there for her when she was convicted of embezzlement and sent to the California Institute for Women. Now, at 32, she is about to be paroled, having served 22 months of a four-year sentence. Nord Lafferty wants to be sure she stays straight, stays at home and away from the drugs, the booze, the gamblers.

It seems a straightforward assignment for Kinsey: babysit Reba until she settles in, make sure she follows all the rules of her parole. Maybe all of a week's work. Nothing untoward—the woman seems remorseful and friendly. And the money is good. But life is never that simple, and Reba is out of prison less than 24 hours when one of her old crowd comes circling around.

Readers have come to expect the unexpected from Sue Grafton, and R Is for Ricochet is no exception. In it, a complex and clever money-laundering scheme is just a cover for a novel that is all about love: love gone wrong, love betrayed, love denied. And love avenged. For Reba Lafferty, its moral is clear: Sometimes what you hand out in life comes back to bite you in the ass. Sometimes the good guys win, even when they lose.

R is for Ricochet

This title is due for release on July 13, 2004
We'll send you an email as soon as it is available!