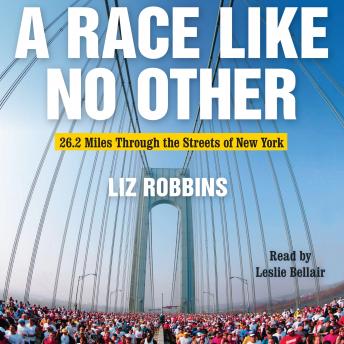 A Race Like No Other: 26.2 Miles Through the Streets of New York

“Gets closer to this marathon than an avenue railbird, and it leaves impressions not fleeting, but lasting.”—Sports Illustrated

The New York City Marathon is considered one of the nation’s—and the world's—premier sporting events. A reporter for the New York Times, Liz Robbins brings the color, the history, the electricity of this remarkable annual competition alive in A Race Like No Other. Centering her narrative around the fabled 2007 running, Robbins captures all the intensity of the grand event, following the runners—both professional and amateur—along 26.2 grueling miles through the streets of New York, from the starting line at the Verrazano Narrows Bridge to the finish line in Central Park, and offering fascinating portraits of marathon legends like the race's charismatic founder, the late Fred Lebow, and nine-time champion Grete Waitz. The Wall Street Journal raves: “Robbins nails the race, painting a broad, impressionistic portrait of what I consider New York’s greatest day.” No other book captures the excitement of the New York City Marathon like A Race Like No Other.

Race Like No Other: 26.2 Miles Through the Streets of New York

This title is due for release on February 8, 2012
We'll send you an email as soon as it is available!