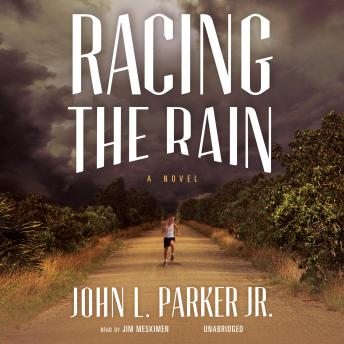 Racing the Rain: A Novel

From the author of the New York Times bestseller Once a Runner—“the best novel ever written about running” (Runner’s World)—comes that novel’s prequel, the story of a world-class athlete coming of age in the 1950s and ’60s on Florida’s Gold Coast.

Quenton Cassidy’s first foot races are with nature itself: the summer storms that sweep through his subtropical neighborhood. Shirtless, barefoot, and brown as a berry, Cassidy is a skinny, mouthy kid with aspirations to be a great athlete. As he explores his primal surroundings, along the Loxahatchee River and the nearby Atlantic Ocean, he is befriended by Trapper Nelson, “the Tarzan of the Loxahatchee,” a well-known eccentric who lives off the land.

In junior high school, quite by chance, Cassidy discovers an ability to run long distances, but his real dream is to be a basketball star. Still, Cassidy absorbs Nelson’s view of running as a way of relating to and interacting with the natural world. Though he is warned of Nelson’s checkered past, Cassidy dismisses the stories as superstitious gossip—until his small town is stunned by the disappearance of a prominent judge and his wife. Cassidy’s loyalty to his friend is severely tested just as his opportunity to make his mark as a gifted runner comes to fruition.

John Parker’s prequel to the New York Times bestseller Once a Runner vividly captures how a runner is formed and the physical endurance, determination, and mindset he develops on the way to becoming a champion. Racing the Rain is an epic coming-of-age classic about the environments and friendships that shape us all.

“Racing the Rain’s depiction of the running life and the Florida of an era gone by is wonderfully authentic. Among those who’ve tried to capture the drama and beauty of the sport, John L. Parker Jr. is surely the best.”—Jeff Galloway, US Olympian

Racing the Rain: A Novel