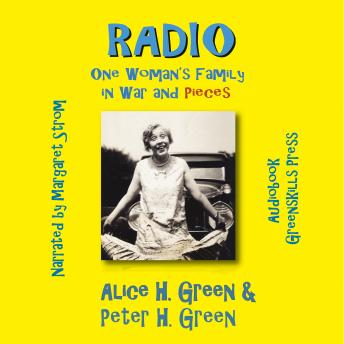 Radio: One Woman's Family in War and Pieces

This eyewitness account of World War II social history, women's progress and the Golden Years of Radio are woven into one woman's humorous and poignant autobiography of her family struggles and her attempts to fulfill her creative dreams.

Rating 4.5 for humor and a true story that needs to be told.

He loved me, he treasured me, and he pampered meand then he left me for the Marines. He finally had to admit.that I was his equal. Alice Green

This is a wonderful gift book. Alice Green's writing is fresh and at times laugh-aloud funny, parts of it reminiscent of Cheaper by the Dozen. Thornton Wilder instructed Alice in creative writing. I recommend this book to all readers who enjoy a good laugh. The section We Bought a Crooked House was hilarious. --Paula B., Amazon reviewer

War II was a tipping point for social change in America. With their men at war, nineteen million women joined the work force. Radio, the first instantaneous mass

medium, provided daytime serial drama, entertainment and news, including pronouncements of world leaders and terrifying war reports, as President Roosevelt used the new medium to rally the nation to arms and win the war.

Alice Green's lost and recently found eyewitness accounts of her childhood, her own war, the Golden Years of Radio and the postwar housing shortage are told from the light-hearted viewpoint of a shy, youngest child, who learns she can make even the stormy and outrageous characters in her own family laugh. With a little help from her son, who (just barely) lived to finish it, her story stands for unsung American women in war and survives as Alice's triumph.

Radio: One Woman's Family in War and Pieces