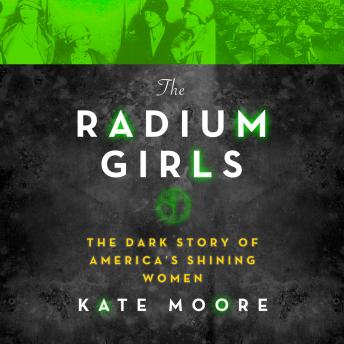 The Radium Girls: The Dark Story of America’s Shining Women

1917. As a war raged across the world, young American women flocked to work, painting watches, clocks and military dials with a special luminous substance made from radium. It was a fun job, lucrative and glamorous-the girls themselves shone brightly in the dark, covered head to toe in the dust from the paint. They were the radium girls.
As the years passed, the women began to suffer from mysterious and crippling illnesses. The very thing that had made them feel alive-their work-was in fact slowly killing them: they had been poisoned by the radium paint. Yet their employers denied all responsibility. And so, in the face of unimaginable suffering-in the face of death-these courageous women refused to accept their fate quietly, and instead became determined to fight for justice.
Drawing on previously unpublished sources-including diaries, letters, and court transcripts, as well as original interviews with the women's relatives-The Radium Girls is an intimate narrative account of an unforgettable true story. It is the powerful tale of a group of ordinary women from the Roaring Twenties, who themselves learned how to roar.

The book was wonderful, the narrator was not. This is the first audio book I would have enjoyed more if I had read it myself. The tone and inflection of the narrator was robotic. It sounded like a computer generated voice and not a real person. The only reason I listened to the entire book was because the story is so interesting.

At times, I wished that the author would get to the point. She seemed to go over and over the same information about a given character. However, I did think that all the personal details that she was able to come up with after interviewing families of the victims made the stories more poignant, and made the characters easier to relate to. I think this book is an important one, with very important topics from both a medical and a legal standpoint.

Absolutely riveting. Not only a good read but really interesting part of our history. I had no idea...

A very interesting narrative. Keeps ones interest throughout,

Terribly distracting narrator got in the way of a decent read. Very unnatural cadencing and enunciation.

Amazing book. I never knew a lot of what the author talked about with the radium girls went through. it's really sad.

At first it took some getting used to the narrator. The book grew monotonous after a while. The story is amazing though and my heart went out to the poor women.

Horrifically fascinating book. It goes into great detail, and in some areas needs to get to the point, but overall a phenomenal story. Not a fan of the narrator, could constantly hear her swallowing and it got to be distracting.