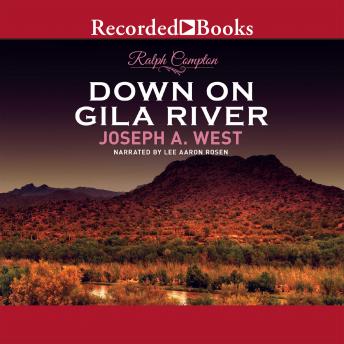 Ralph Compton Down on Gila River

At fifty, cattle driver Sam Sawyer thinks he can finally dust off and retire, maybe open an eating house. But after a pack of Apache ambushes him and leaves him to die in Gila River country, he barely makes it to a remote ranch. The owner, Hanna Stewart, has worked the desert spread with her young daughter ever since her husband went for a ride and never returned. For years, she' s been victimized by the corrupt sheriff of Lost Mine, Vic Moseley. Turns out, Moseley' s evil intentions don' t stop with Hannah Stewart. And things are fixing to get downright bloody. After a lifetime in the saddle, Sam' s about to ride not only the hardest trail of his life-- but possibly the last....

Ralph Compton Down on Gila River

by Ralph Compton, Joseph A. West