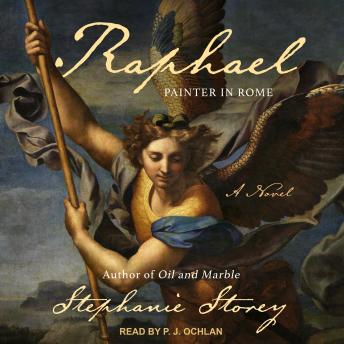 Raphael, Painter in Rome: A Novel

Michelangelo's Sistine Chapel ceiling is one of the most iconic masterpieces of the Renaissance. Here, in Raphael, Painter in Rome, Storey tells of its creation as never before: through the eyes of Michelangelo's fiercest rival-the young, beautiful, brilliant painter of perfection, Raphael. Orphaned at age eleven, Raphael is determined to keep the deathbed promise he made to his father: become the greatest artist in history. But to be the best, he must beat the best, the legendary sculptor of the David, Michelangelo Buonarroti. When Pope Julius II calls both artists down to Rome, they are pitted against each other: Michelangelo painting the Sistine Ceiling, while Raphael decorates the pope's private apartments. As Raphael strives toward perfection in paint, he battles internal demons: his desperate ambition, crippling fear of imperfection, and unshakable loneliness. Along the way, he conspires with cardinals, scrambles through the ruins of ancient Rome, and falls in love with a baker's-daughter-turned-prostitute who becomes his muse.

With its gorgeous writing, rich settings, endearing characters, and riveting plot, Raphael, Painter in Rome brings to vivid life these two Renaissance masters going head to head in the deadly halls of the Vatican.

Raphael, Painter in Rome: A Novel