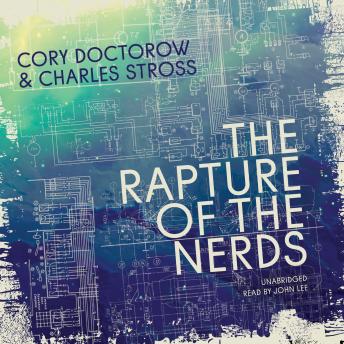 The Rapture of the Nerds

Welcome to the fracturedfuture, at the dusk of the twenty-first century.
Earth has a population ofroughly a billion hominids. For the most part, they are happy with their lot.Those who are unhappy have emigrated, joining the swarming densethinker cladesthat fog the inner solar system with a dust of molecular machinery so thick itobscures the sun.
The splinterymetaconsciousness of the solar system has largely sworn off its pre-post-humancousins dirtside, but its minds sometimes wander ... and when that happens, itcasually spams Earth's networks with plans for cataclysmically disruptivetechnologies that emulsify whole industries, cultures, and spiritual systems. Asane species would ignore these get-evolved-quick schemes, but there's alwayssomeone who'll take a bite from the forbidden apple.
So until the overmindsbore of stirring Earth's anthill, there's Tech Jury Service: random humans,selected arbitrarily, charged with assessing dozens of new inventions andruling on whether to let them loose. Young Huw, a technophobic, misanthropicWelshman, has been selected for the latest jury, a task he does his best toperform despite an itchy technovirus, the apathy of the proletariat, and acouple of truly awful moments on bathroom floors.
The Rapture of the Nerds is a brilliant collaboration by Cory Doctorow andCharles Stross, two of the defining personalities of post-cyberpunk sciencefiction.

Rapture of the Nerds