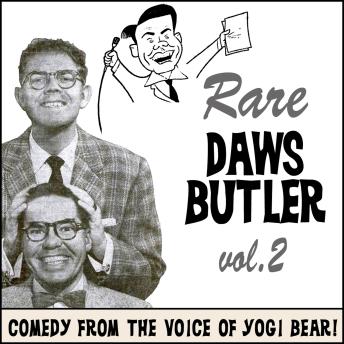 As heard on Sirius XM Radio and NPR stations, here is volume two of Rare Daws Butler.
Daws Butler was the voice magician behind such classic cartoon characters as Yogi Bear, Huckleberry Hound, and Quick Draw McGraw. Daws also cowrote and voiced many of Stan Freberg's greatest comedy records, including Saint George and the Dragonet. Host Joe Bevilacqua presents an hour of rare Daws Butler comedy recordings featuring the voices of Stan Freberg, June Foray, and others, including 'The 64 Million Dollar Question,' 'Bingo Ringo,' 'This is Hawthorne,' 'Mr. Jinks Had A Little Lamb,' 'Clementine,' 'Yogi Tells All,' 'Confidgetyential,' and 'Peppy Possum.'