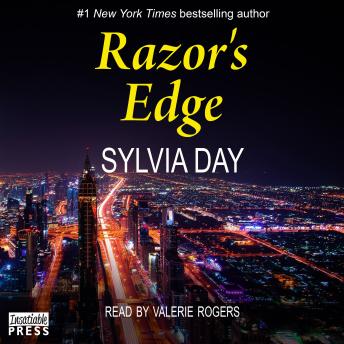 From Sylvia Day, the #1 New York Times bestselling author of the Crossfire novels, comes Razor’s Edge, a novella of the Shadow Stalkers—where hearts are laid bare, where desire is a risk, and where love is born from the most intimate secrets…It wasn’t her fault he was strung out from wanting her… It was a cool night in Carmel but for Deputy US Marshal Jack Killigrew, thoughts of Rachel were generating a lot of heat and sweat into his lonely nights. But having her could never be more than a fantasy. She was his best friend’s widow. He promised to look after her should anything happen. And there’s no way Jack could betray the memory of his buddy by making moves on the guy’s wife—no matter how long he’s desired her.Rachel’s marriage had been perfect. So had her husband. But fate had a different plan. Now Rachel’s a single mother, resilient and independent. It’s time for her to move on and let a new man into her life. Jack’s been there for her in the past but now she needs him in a different way. All Rachel has to do in convince him that it’s right, that it’s the best thing for both of them, and that it’s about time…Includes a preview of Taking the Heat, another novella in the Shadow Stalkers series.Razor’s Edge previously appeared in The Promise of LovePraise for the novels of Sylvia Day:“When it comes to brewing up scorchingly hot sexual chemistry, Day has few literary rivals.”—Booklist “…obliterates the competition.”—Joyfully Reviewed“A wild, high-altitude ride.”—USAToday.com