Real Boys: Rescuing Our Sons from the Myths of Boyhood 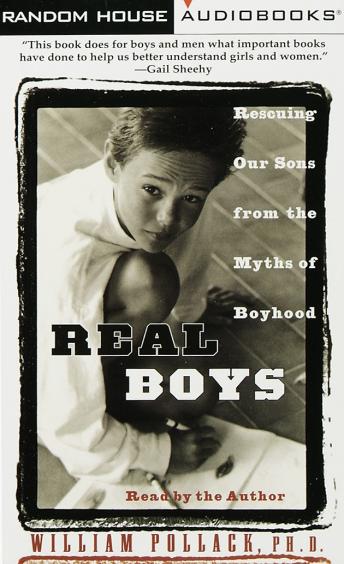 'While it may seem as if we live in a man's world,' reports Pollack, 'we do not live in a boy's world.' Many boys today are struggling either silently, with low self-esteem and feelings of loneliness and isolation, or publicly, by acting out feelings of emotional and social disconnection through anger and acts of violence against themselves or their friends and families. While academic performance and self-esteem are low, the rates of suicide and depression are on the rise. As the recent tragedies in Jonesboro, Arkansas, and Edinboro, Pennsylvania demonstrated, boys today are in crisis--on a national scale. Real Boys explains why.

Much has been written about the plight of girls in adolescence--their decreased self-esteem, increased emphasis on appearance, gender bias in the classroom, and the confusion about what it means to be feminine. Boys, Pollack discovered, suffer a similar gender identity crisis even before adolescence. Reasearch shows that male infants are more emotionally expressive than female infants. However, as a boy ages, his emotional expressiveness decreases. Why? Because 'The Boy Code'--society's definition of what it means to be a boy--demands that boys suppress or cover up their emotions. As a result, boys develop a 'mask of masculinity' to hide their shame, vulnerability and the other feelings they cannot express publicly. The inability to show true emotions hardens a boy until, ultimately, he loses touch with them. Today's boys, Pollack writes, are 'only allowed to lead half their emotional lives.'

Real Boys: Rescuing Our Sons from the Myths of Boyhood