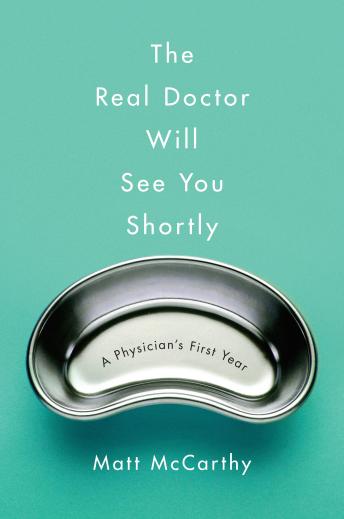 The Real Doctor Will See You Shortly: A Physician's First Year

A scorchingly frank look at how doctors are made, bringing readers into the critical care unit to see one burgeoning physician's journey from ineptitude to competence.

In medical school, Matt McCarthy dreamed of being a different kind of doctor—the sort of mythical, unflappable physician who could reach unreachable patients. But when a new admission to the critical care unit almost died his first night on call, he found himself scrambling. Visions of mastery quickly gave way to hopes of simply surviving hospital life, where confidence was hard to come by and no amount of med school training could dispel the terror of facing actual patients.

This funny, candid memoir of McCarthy’s intern year at a New York hospital provides a scorchingly frank look at how doctors are made, taking readers into patients’ rooms and doctors’ conferences to witness a physician's journey from ineptitude to competence. McCarthy's one stroke of luck paired him with a brilliant second-year adviser he called “Baio” (owing to his resemblance to the Charles in Charge star), who proved to be a remarkable teacher with a wicked sense of humor. McCarthy would learn even more from the people he cared for, including a man named Benny, who was living in the hospital for months at a time awaiting a heart transplant. But no teacher could help McCarthy when an accident put his own health at risk, and showed him all too painfully the thin line between doctor and patient.

The Real Doctor Will See You Shortly offers a window on to hospital life that dispenses with sanctimony and self-seriousness while emphasizing the black-comic paradox of becoming a doctor: How do you learn to save lives in a job where there is no practice?

Real Doctor Will See You Shortly: A Physician's First Year