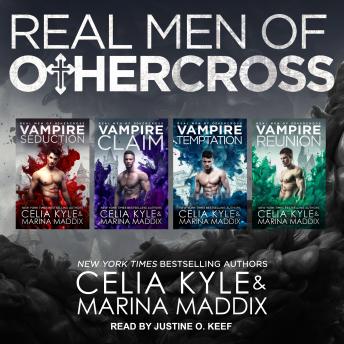 Vampire Seduction: When attorney and vampire Alena Falkov catches the scent of her Beloved-her one true soul mate-in the hallways of the courthouse, no one could blame her for tracking him down. Now if only he wasn't the defendant . . . and by all accounts, guilty. Or is he?

Vampire Claim: After one passionate night, witch Iris Holloway is left with more than just the memory of the sexiest vampire she'd ever met-she's pregnant. But what will happen when the baby's vampire Master father shows up at her work after seven long months, trying to claim her as his Beloved?

Vampire Tempation: As a sultry siren, Cora Murphy can have any man she wants. But Cora just wants to live a normal life, working at Othercross as a Sentinel and hoping one day a man will fall in love with her instead of succumbing to her mystical-and totally bogus-allure.

Vampire Reunion: After losing his beloved-his one true mate-centuries ago, Orrin Nicolaides knows he'll never find another but he's tired of being alone. The problem is that even as he searches for a suitable vampire mate, he can't stop thinking about the sexy little witch he drunkenly snacked on the night of his son's wedding.