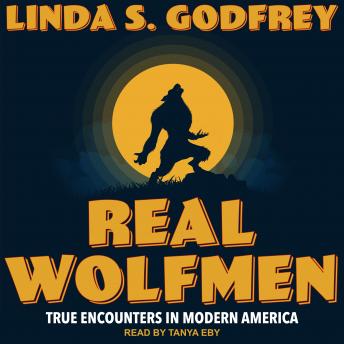 The U.S. has been invaded-if many dozens of eyewitnesses are to be believed-by upright, canine creatures that look like traditional werewolves and act as if they own our woods, fields, and highways. Sightings from coast to coast dating back to the 1930s compel us to ask exactly what these beasts are, and what they want.

Researcher, author, and newspaper reporter Linda S. Godfrey has been tracking the manwolf since the early 1990. In Real Wolfmen she presents the only large-scale cataloguing and investigation of reports of modern sightings of anomalous, upright canids. First-person accounts from Godfrey's witnesses-who have encountered these creatures everywhere from outside their car windows to face-to-face on a late night stroll-describe the same human-sized canines: They are able to walk upright and hold food in their paws, interact fearlessly with humans, and suddenly and mysteriously disappear.

Godfrey explores the most compelling cases from the modern history of such sightings, along with the latest reports, and undertakes a thorough exploration of the nature and possible origins of the creature.