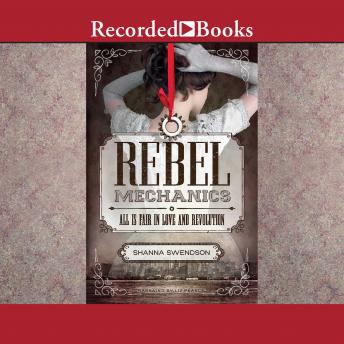 Rebel Mechanics: All is Fair in Love and Revolution

In a world where the British nobility comes to power because they have magical abilities, the American Revolution of 1776 never got beyond a few angry protests to Parliament. The colonists didn' t stand a chance against a ruling class with that much power. Now it' s 1888, and an underground society of mechanics, scientists, and engineers is developing non-magical sources of power via steam engines and electric dynamos that they hope will put them on an even - or superior - footing so they can overthrow the magical rulers and gain freedom and independence for the American colonies. When Verity Newton comes to New York City to serve as young governess to one of the leading magical families, she accidentally befriends several rebel mechanics. They immediately recruit her as the perfect spy to gain inside information on the magister class in a magical Gilded Age New York. Even though Verity fights for the rebel cause, she' s torn because she feels more at home with the blue blood Lyndon children and their young guardian uncle than she ever did with her own family. She also feels the strain of her own secret that would turn the rebels against her and cause her to be shut away by the magisters: she' s half-magical herself--born of an illicit relationship between her mother and a magister man. Her very existence is seen as a threat to the purity of the magical bloodline. Meanwhile, her employer, Lord Henry, has his own secret. Verity is increasingly convinced that he' s the Robin Hood-like leader of a band of magical rebels working to free the colonies from British rule. As the actions of the rebel mechanics and the rebel magisters gain the attention of the Crown, Verity realizes that it will take both groups to achieve American independence, and she' s uniquely situated to bring them together - that is, if they can survive long enough once the city comes under martial law and the British forces stop at nothing to uncover the rebels and seize their machines.