Rebel Without A Bra: A Sci Fi Comedy Where Women Wield The Whips. 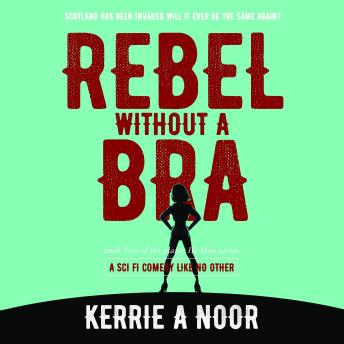 Planet Hy Man is in turmoil. Her leader lost on earth. Will Mex rise to the challenge or fade faster than her hair dye?

Mex is heading for the Edinburgh Festival in search of lost energy. Hot on her heels is Beryl, her leader who has already dropped Mex in it once and may do again. Beryl has a planet to save and an arch rival to beat. A feat made near impossible considering her arch-rival has taken over Beryl’s “operations room” along with every high- tech spying equipment going.

As time runs out Beryl turns to Mex. Mex having discovered gin hooks up with a troupe of performing transvestites, tosses her mobile to the wind, and delves into the seedier side of the festival. Saving Planet Hy Man could not be further from her mind if she was comatose.

Will Beryl convince Mex to sober up and save their planet or will Mex stick with the padded bras and all who wear them?

Rebel Without A Bra is the quirky second book in the Planet Hy Man science fiction comedy series. If you like high-mileage heroines, fast-paced satire, and meticulously crafted universes, then you’ll love Kerrie Noor’s otherworldly farce.

Buy Rebel Without A Bra to blast into a battle of the sexes today!

Rebel Without A Bra: A Sci Fi Comedy Where Women Wield The Whips.

This title is due for release on September 11, 2019
We'll send you an email as soon as it is available!