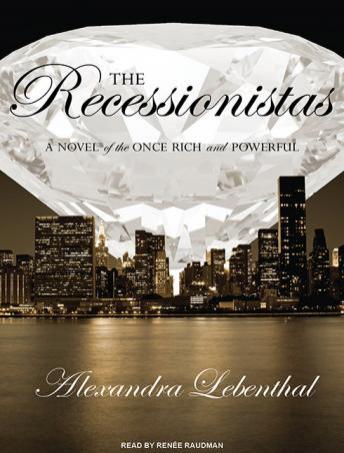 The Recessionistas: A Novel of the Once Rich and Powerful

It's the day after Labor Day, 2008, and the elite universe of New York's Upper East Side is about to unravel along with the economy. Socialite Grigsby Somerset is barely aware of her changing world and has no idea her investment banker husband, Blake, is about to enter into a devil's bargain with hedge fund owner John Cutter.

As autumn unfolds, Grigsby's fairytale life starts to unwind. Street-smart Renee Parker has been hired as John's executive assistant and is convinced that something is amiss with her new boss. Renee enlists her friend Sasha Silver, CEO of Silver Partners, to help her decipher what is happening. They soon discover that John is nearly ruined, except for the assets he is hiding in the Cayman Islands from his wife, Mimi, and has concocted with Blake a scheme to redeem himself. This tale of expulsion from a modern-day Garden of Eden captures what happens when economic decline spells ruin for Manhattan's pampered elite.

Recessionistas: A Novel of the Once Rich and Powerful