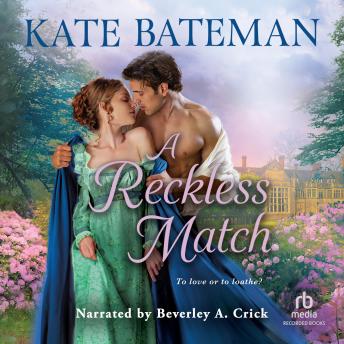 The first in a new regency romance series about two feuding families, and reunited childhood enemies whose hatred turns to love. Maddie Montgomery's family is in debt, and her hope rests on the rival Davies clan missing their yearly "pledge of goodwill,' ceding the land that separates their estates. With Maddie's teenage nemesis, Gryffud "Gryff" Davies, Earl of Powys, away, hope is in reach. But then Gryff shows up on a horse and is stunned that the tomboy he once teased is now a woman. When Gryff and Maddie discover contraband on their land, they realize it can benefit both families. But they've also uncovered a dangerous plot, and they need to work together to get out alive. Soon their hatred for each other starts to feel more like attraction. Kate Bateman brings crackling banter, steamy romance, and a dash of adventure into the first book in the Ruthless Rivals series. Contributor Bio(s) Kate Bateman, (also writing as K. C. Bateman), is the #1 bestselling author of historical romances, including her RITA® nominated Renaissance romp, The Devil To Pay, and the novels in the Secrets & Spies series To Steal a Heart, A Raven's Heart, and A Counterfeit Heart. When not writing novels that feature feisty, intelligent heroines and sexy, snarky heroes you want to both strangle and kiss, Kate works as a fine art appraiser and on-screen antiques expert for several popular TV shows in the UK. She splits her time between Illinois and her native England. Follow her on Twitter to learn more.