Recon: A Battle for the Gods 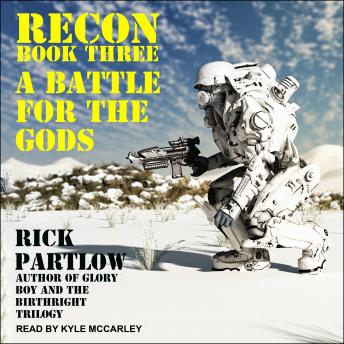 The mission couldn't be simpler. It sounds like an easy, straightforward operation to take care of some small-time raiders hijacking black-market weapons shipments in the Pirate Worlds. Former Recon Marine war hero Randall Munroe doesn't need to know why his Corporate bosses care about one group of criminals stealing from another, he just has to do the job.

But when Munroe is ordered to lead his crack squad of mercenaries into a gang war on the harsh, ice-covered, barely habitable battleground that is Peboan, he discovers that things are never simple and straightforward when you work for Andre Damiani, the Executive Director of the Corporate Council. And just when he thinks he knows what the battle is about, he's thrown a new curve.

Because if there's one thing that every criminal, mercenary or Corporate executive in the Commonwealth is willing to kill for, it's access to the lost technology of the mysterious Predecessors. The alien race known as the Predecessors or Ancients engineered hundreds of planets and moons to support life, created a system of wormholes that connected them and then simply vanished without a trace, tens of thousands of years ago. Opportunists search endlessly for any remnant of their world-shattering power, while others go so far as to worship them as gods. And when you're fighting for the powers of the very gods, no price is too high.

Recon: A Battle for the Gods