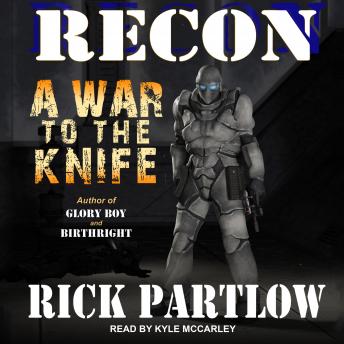 Recon: A War to the Knife

Tyler Callas is the pampered heir of a high-level Corporate Council executive, groomed from birth to take a seat beside her as a member of the ruling class of the Commonwealth society. But the bloody war with the alien Tahni has hit close to home and Tyler wants to join the military, something his powerful mother won't allow.

Desperate to escape her control, Tyler changes his identity to Randall Munroe, a product of the poverty-stricken Underground, and enlists in the Marines. There he flourishes, becoming a member of an elite Force Recon unit and striking deep behind enemy lines. But when his platoon is assigned to take back the colony on Demeter from the Tahni, the mission falls apart, most of his comrades are killed and Munroe is wounded, separated from his unit and left for dead on an enemy occupied world.

With no other choice, he organizes the civilian colonists into a resistance movement and begins fighting against the occupation with limited supplies and no support. As the situation becomes more and more desperate, what began as a high-tech, interstellar conflict will become a war to the knife . . .

Recon: A War to the Knife