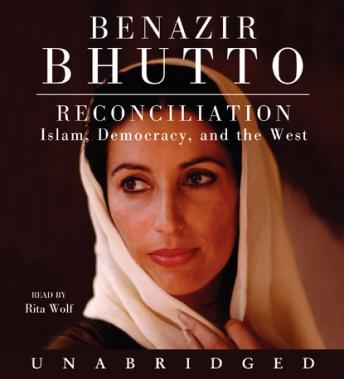 Reconciliation: Islam, Democracy, and the West

From the former Prime Minister of Pakistan, who finished writing this extraordinary book just days before her assassination, comes a groundbreaking vision of how to bridge the widening gap between the Islamic world and the West.
Benazir Bhutto returned to Pakistan in October 2007, after eight years of exile, hopeful that she could be a catalyst for change. Upon a tumultuous reception, she survived a suicide-bomb attack that killed nearly 200 of her countrymen. But she continued to forge ahead, with more courage and conviction than ever, since she knew that time was running out-for the future of her nation, and for her life. In Reconciliation, Bhutto recounts in gripping detail her final months in Pakistan and offers a bold new agenda for how to stem the tide of Islamic radicalism and to rediscover the values of tolerance and justice that lay at the heart of her religion. After reading this book, it will become even clearer what the world has lost by her assassination.

Reconciliation: Islam, Democracy, and the West