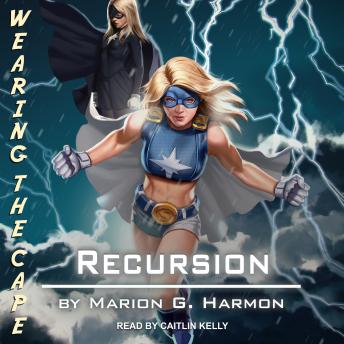 #7 of Wearing the Cape

It's been just weeks since the state funeral for the Sentinels, Atlas, Ajax, and Nimbus, lost in the Whittier Base Attack. Astra, Hope, is recovered from her own injuries. At least physically. Mentally . . . not so much, but she feels ready to actively wear the cape again. Which is good since, between the revelation of her short-lived relationship with Atlas (nine years her senior) and her virally pungent public comments on the current political debate over breakthrough registration (the National Public Safety Act), she needs to raise her profile. But she's better now, steady, ready for anything.

Or is she? First her quantum-ghost BF Shell reveals that something's off. Hope's changed. Unaccountably and impossibly changed, she's not the Hope she was even just last week. Confronted with Shell's evidence, Hope recovers an impossible memory and follows it to the realization that she's really not the Hope of last week. She remembers three years of memories of a life she hasn't lived yet. She remembers the fight with Villains Inc., the addition of the Young Sentinels, her adventures in Littletone, Japan, and across a dozen extrarealities. The one thing she doesn't remember is how she got here.