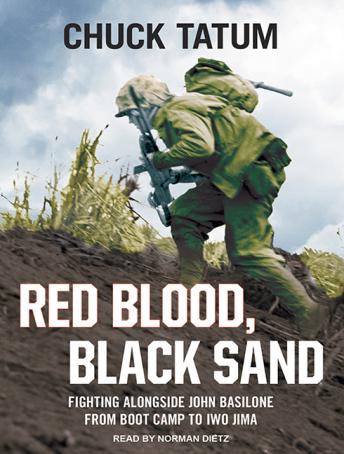 In 1944, the U.S. Marines were building the 5th Marine Division-also known as 'The Spearhead'-in preparation for the invasion of the small, Japanese-held island of Iwo Jima.

When Charlie Tatum entered Camp Pendleton to begin Marine boot camp, he was just a smart-aleck teenager eager to serve his country. Little did he know that he would be training under the watchful eyes of a living legend of the Corps-Congressional Medal of Honor recipient John Basilone, who had almost single-handedly fought off a Japanese force of three-thousand on Guadalcanal, and survived.

It was from Basilone and other 'Old Breed' sergeants that Tatum would learn how to fight like a Marine and act like a man, as he went through the hell of boot camp to the raucous port of Pearl Harbor with its gambling, gals, and tattoos, to the island of death itself, where he hit the black sand of Iwo Jima with thirty thousand other Marines in the climactic battle of the Pacific Theater.

It was on that godforsaken strip of land that Tatum and Basilone would meet again under a hellish rain of bullets and bombs-and where Tatum would make his own mark, carrying ammo for the machine gun carried by Basilone. Together they would lead the breakout off the beach, driving through and destroying a swath of enemy soldiers in the first man-to-man combat on Iwo Jima.

Red Blood, Black Sand is the story of Chuck's two weeks in hell, where he would watch his hero, Basilone, fall, where the enemy stalked the night, where snipers haunted the day, and where Chuck would see his friends whittled away in an eardrum-shattering, earth-shaking, meat grinder of a battle.

Before the end, Chuck would find himself, like Basilone, standing alone, blind with rage, firing a machine gun from the hip, in a personal battle to kill a relentless foe he had come to hate. This is the island, the heroes, and the tragedy of Iwo Jima, through the eyes of the battle's greatest living storyteller, Chuck Tatum.