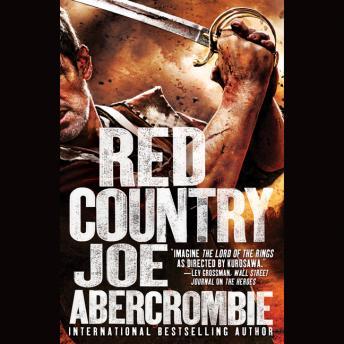 A New York Times bestseller!
They burned her home.
They stole her brother and sister.
But vengeance is following.

Shy South hoped to bury her bloody past and ride away smiling, but she'll have to sharpen up some bad old ways to get her family back, and she's not a woman to flinch from what needs doing. She sets off in pursuit with only a pair of oxen and her cowardly old step father Lamb for company. But it turns out Lamb's buried a bloody past of his own. And out in the lawless Far Country the past never stays buried.

Their journey will take them across the barren plains to a frontier town gripped by gold fever, through feud, duel and massacre, high into the unmapped mountains to a reckoning with the Ghosts. Even worse, it will force them into an alliance with Nicomo Cosca, infamous soldier of fortune, and his feckless lawyer Temple, two men no one should ever have to trust . . .

Red Country takes place in the same world as the First Law trilogy, Best Served Cold, andThe Heroes. This novel also represents the return of Logen Ninefingers, one of Abercrombie's most beloved characters.

Pretty good book, not my favorite by Abercrombie but still worth reading. The narrator isn't bad but I think he could do a better job altering his voice for different characters. Sometimes one main character didn't sound very different from another.

Abercrombie’s books just get better and better! The entire time I was begging for just ONE happy ending lmfao

Great addition to the first law series I enjoy the stand alone stories that add to the original series and you finally meet caracters you only heard mentioned once in the FLS.