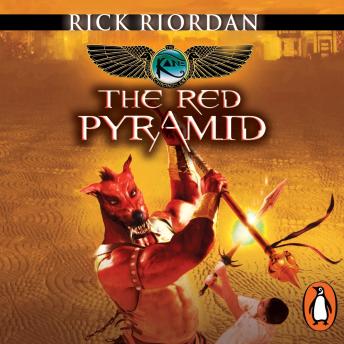 The unabridged, downloadable audiobook edition of Rick Riordan's The Kane Chronicles: The Red Pyramid, read by Joseph May and Jane Collingwood.

Percy Jackson fought Greek Gods. Now the Gods of Egypt are waking in the modern world...

'I GUESS IT STARTED THE NIGHT OUR DAD BLEW UP THE BRITISH MUSEUM . . .'

CARTER AND SADIE KANE'S dad is a brilliant Egyptologist with a secret plan that goes horribly wrong. An explosion shatters the ancient Rosetta stone and unleashes Set, the evil god of chaos . . .

Set imprisons Dr Kane in a golden coffin and Carter and Sadie must run for their lives. To save their dad, they embark on a terrifying quest from Cairo to Paris to the American South-west and discover the truth about their family's connection to the House of Life: an Egyptian temple of magic that has existed for thousands of years.

The pharaohs of ancient Egypt are far from dead and buried. And so, unfortunately, are their gods . . .