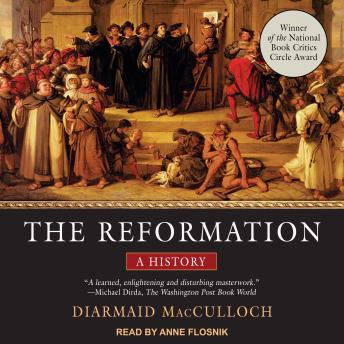 The Reformation: A History

At a time when men and women were prepared to kill-and be killed-for their faith, the Protestant Reformation tore the Western world apart. Acclaimed as the definitive account of these epochal events, Diarmaid MacCulloch's award-winning history brilliantly recreates the religious battles of priests, monarchs, scholars, and politicians-from the zealous Martin Luther and his Ninety-Five Theses to the polemical John Calvin to the radical Igantius Loyola, from the tortured Thomas Cranmer to the ambitious Philip II.

Drawing together the many strands of the Reformation and Counter-Reformation, and ranging widely across Europe and the New World, MacCulloch reveals as never before how these dramatic upheavals affected everyday lives-overturning ideas of love, sex, death, and the supernatural, and shaping the modern age.

Absolutely brilliant analysis and interpretation of The (more than Protestant) Reformation. It's based on sound and recent scholarship, so it's long. And, at times, it's difficult to keep in mind all of the actors. But it is richly rewarding.