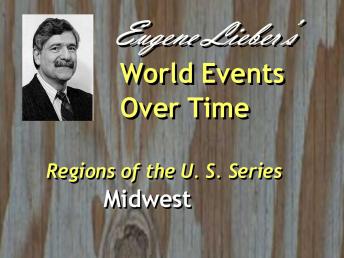 Regions of the U.S. Series: Midwest

Early History Through the 18th Century. Plains Indians. Their ability to adapt to the climate and lay of the land in the midsection of the U.S. The buffalo is the center of their life. The white settlers see the area as the American desert where nothing can grow. They push the Indians into this desert expecting them to succumb but they do not. (3.59.00) = The Frontier. Attraction to settlers is land. The frontier is the limit of settlement, not the West per se. The push across the Appalachian Divide from the East following the American Revolution. Inhospitable land changes with the invention of the John Deere plow which breaks through the hard sod revealing incredibly rich soil. (7.35.00) = The 19th Century. Old Immigration. Immigration in the 1840s and 1850s is from North and West Europe who are attracted by cheap land. Germans settle in Cincinnati and Milwaukee, Swedes in Wisconsin. Farming is a hard, lonely life. (9.36.00) = Contact With the Indians is sometimes peaceful, becomes violent when Indians begin to resist the taking of their land. The army comes to fight the Indians. (10.31.00) = The Midwest Becomes the Nation's Feeder. The Mississippi is the South's link to its food. The building of the Erie Canal System in 1810-1820 inks the Midwest to the East instead of the South, becoming a problem for the South in the Civil War. (12.03.00) = Great Plains Settlements. Conflicts of land use between farmers and cattle ranchers. Invention of barbed wire setting boundaries and the series of range wars. (13.35.00) = Midwest seen as the heartland of the county. Jefferson sees the farmer as pristine, legendary. Lincoln's connections to the farm and his rags-to-riches mythology. (18.13.00) = The Civil War benefits farmers who supply the Army unless they are caught up in the fighting and the killing. Prosperity continues a few years after the war until the army is demobilized in 1869. Farm prices drop in the 1870s and normally conservative farmers begin organized resistance, sometimes violent. (24.39.00) = The Grangers organized to help counter the social isolation of farm life, also politically organize against the railroads. Once favored by farmers by opening national and international markets, the unregulated railroads are now seen as abusive and hurting poor farmers. (31.44.00) = The Populist Party. The Democrats and Republicans are dominated by the industrial giants so the farmers create the Populist Party in 1890. Its platform presses for numerous reforms. Part of the movement is hostility to the hard money policies of the Northeast and an accepted a level of anti-Semitism (39.48.00) = The Election of 1892. The "Cross of Gold" speech by William Jennings Bryan. The victory of the Republican, William McKinley, decided by Midwest farmers whose situation was improving, results in the Populist Party falling apart. (45.07.00) = The Role of Cities for Farmers. The urban need for farm products. Chicago, with its meatpacking, is the destination for cattle. The giants, Swift and Armor, divide the market. Expose of the meatpacking industry by Upton Sinclair in his book, "The Jungle." (50.48.00) = The 20th Century. The Progressive Era, 1900-1914. The emphasis is urban not rural as advocated by the Populist Party. Robert LaFollete makes Wisconsin a model of progressive reform. Reform is at the municipal level is seen in Cleveland and Toledo as well. (56.11.00) = The Auto. Henry Ford makes the auto affordable to the middle class, changing American life. Made in Detroit, it is a Midwest phenomenon. Although brutally anti-union, and virulently anti-Semitic, Ford is admired as a self-made man, self-financing a family business and paying high wages. Auto workers are immigrant labor and migrants from the countryside. (1.00.35.00) = Issues of Race. White and black migrants from the South to the North and Midwest cities are a threat to existing white workers by being used as scab labor and lowering the wage scale. Major race riots. (1.04.04.00) = Positive Images of the Midwest. Popular image sees the Northeast as more important. In reality the Midwest is at the heart of important cultural movements including the literature of Hemmingway and American jazz. The role of jealousy, pride, and stereotyping. The Midwest is more laid-back, hospitable than the Northeast. The Depression 30s. The Dust Bowl adds to the misery of the times. The Great Plains disaster of climate, too much clearing of root system, lack of rainfall, top soil blown away by dust storms. The Oakies and Arkies head west to California. (1.08.48.00) = Regressive Attitudes of the Midwest. It is xenophobic, anti-Semitic. Origins of the Cold War and Senator Joseph McCarthy of Wisconsin who in 1950 uses fear of Communism and fear of the unknown to enhance his own power. (1.13.02.00) = The Present. Farming is still in decline, changing from the family farm to agribusiness and mass production which the government favors. The personal tragedy that after generations of rugged individualism the family farmer is unable to get out of debt. (1.20.01.00) = The Future. A strong agricultural element is still in the region. The rust belt reflects the changes in industrialization. In the face of strong unions originating in the 1930s, factories are closing, moving to south of the border for lower labor costs and to avoid pollution laws, transforming farms and cities. The question of adaptation.