Regions of the U.S. Series: Northeast 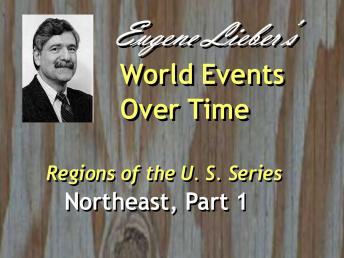 Pre-Industrial Era. Native Americans. Climate and lay of the land determine life style of agriculture, hunting, and fur trapping. The Iroquois Nation is a confederation of tribes governed by the concept of separation of powers with checks and balances. (2.3706) = The Puritans are the first Europeans to arrive, form the Massachusetts Bay Colony, aim to create a perfect colony, but they become more secularized and evolve a strong work ethic (8.45.00) = The Quakers settle in Pennsylvania, are cordial to the Indians, but are replaced by non-Quakers who drive out the Indians in quest for land. (11.08.00 = Agriculture is the economics of the Northeast. The dominant family farm has no need for slave labor. Southern raw materials go to England's industry and not to the North. (13.5700) = Urban life: Boston, NY, Philadelphia. Lower class urbanized workers are called mechanics. Upper class composed of merchants, traders (15.37.00) = Independence. A period of neglect of the American colony by England while fighting wars on the continent. England looks to the colonies to help pay its large war debt. The Boston merchant class resist the taxes (16.57.00) = Boston Massacre. Talk of independence starts after the Boston Massacre, the Stamp Act, and the Battle of Lexington in 1775. (24.17.00) = The Declaration of Independence in 1776. An attempt to abolish slavery is defeated by delegates. (25.33.00) = Economic Motivation. .The Merchant Class wants freer hand like the period of neglect by England, and also wants to rule the country. Selfish economic motives are combined by belief in freedom and independence. (30.05.00 = The Revolution. Only a minority favors revolution. Harsh conditions and a brutal guerilla war. Tensions between the upper class officers and the lower class farmers. Victory against all odds. (32.34.00) = Articles of Confederation. The lower classes have more say with states' rights and a weak federal government, but there is the problem of fragmentation. (34.26.00) = The Constitution of 1787. Strong federal government, states lose some power. (37.29.00) = Economics. The Dominance of Agriculture. The merchant class gains power. The increased use of water power to run mills modeled after England. Alexander Hamilton is prime mover, opposed by Thomas Jefferson who champions rural life.. (43.44.00) = The 19th Century. Transportation Revolution. The canal system, especially the Erie Canal, and later the railroads are mainly financed by the state and federal government counter to laissez faire. This is a boon to Northeast manufacturing, and New York City becomes the commercial capital of the country. (50.00.00) = Slavery. Economics Evolve. Slavery is less feasible in the North and fades with dependence on wage labor, but there is often slave trading. There is also moral revulsion to slavery, leading to the abolitionist movement. (53.20.01) = Religion. The North moves away from religion and becomes more materialistic, but there are revival movements emphasizing the one-on-one relation with God. (55.23.00) = Banking. Hamilton establishes the National Bank in the 1790s which is conservative, has strict rules and serves the old business class. President Andrew Jackson kills the bank, leading to a short term economic depression, but new banking policies are more open to small business and lead to the long term expansion of the U.S. economy.

The 19th Century (continued). The Civil War. Sectional Crisis. South's society is based on slavery, holds back capitalist development. North society is a combination of manufacturing and agriculture, mainly family farms and later homestead farming. South's cotton goes to England instead of Northern textile mills. Conflict is between modernity and backward economy. (4.10.00) = The Republican Party. forms in the 1850s, supports Northern industrialists, rejects slavery. It elects Abraham Lincoln in1860, followed by secession and the Civil War. (9.50.00 = The Civil War. The North has many advantages and some disadvantages. Gettysburg is the turning point in a brutal war of attrition. There is a bitter class divide which sparks the July 1863 draft riots by Irish immigrants who are despised by people already here, and who also compete with free blacks for jobs. The North prevails in April 1865. (16.10.00) = Implications for the nation. Slavery is ended. Economy of the nation now reflects Northern values. Cotton comes to the North, not to England. Federal government is now strong economically, politically and judicially. (19.13.00) = Northern Economy. War inventions aid Northern industry. The role of the mill town. Inland cities are located on rivers. Industrial cities are expanded. (23.47.00) = The New Immigration. from 1880s for the next 40 years is from south and east Europe and goes to the cities creating instant slums. Atrocious, boring, dangerous working conditions including child labor. Workers respond with hopelessness or aspiring hopes. Resistance and a union movement develop. Federal troops, freed from Reconstruction duty in the South, are used to break strikes. (28.39.00) = The 20th Century. Industrialization. Labor Strife. Since the late 19th century into the 20th there is a pattern of labor strife where strikers are battled by private armies of the companies. The media controlled by the industrial giants use the violence to turn public opinion against the strikers, and the military is called out by the governor and the strikers are crushed. (35.31.00) = The Role of the Northeast is Crucial for U.S. industrialization, resulting in problems in working and living conditions. There is strong migration from South and East Europe to the cities, from the countryside to the cities. (36.53.00) = The Blacks. There is a massive migration of blacks to the North, away from the poverty of the sharecropping system in the South, away from the Jim Crow era of total segregation. Segregation is seen in the North in the form of ghettos and by the hostility of whites in competition for jobs and other forms of racism. Yet the 1920s see opening potentials in music, literature and other forms of intellectuality, with New York City the epicenter of changes (44.12.00) = The Depression 30s. The prosperous 20s lead to major growth of corporations, excess profits, and risky ventures. Massive layoffs in Northeast cities and great national suffering. (47.54.00) = The Depression Ends with the Coming of World War II creating full employment. After victory there is pent-up demand for goods and continued prosperity with the onset of the Cold War. The growth of suburbia. (53.24.00) = The Decline of the Northeast. The 1950s see white flight from the cities. The decline of Newark, N.J. precedes the riots there of 1967. Industry's answer to the unions' successes in the 1930s is to leave for non-union areas in the South and Southwest. With the tax base and employment leaving, the North's hold on the economy diminishes. (55.27.00) = Hostility to the Northeast is based on immigration ethnicities, the role of banks, and anti-Semitism against Jews from East Europe. (1.01.27.00) = The Post-Industrial Era. Social, Economic, and Cultural Changes. The emergence of TV in the 1950s with studios in NYC. The integration of baseball with Jackie Robinson. The closing of factories with factory work no longer open to the following generations. The Northeast rust belt. Old industrial cities need ability to adjust, promote service industries in the computer age. Political power of the Northeast changes.

Regions of the U.S. Series: Northeast