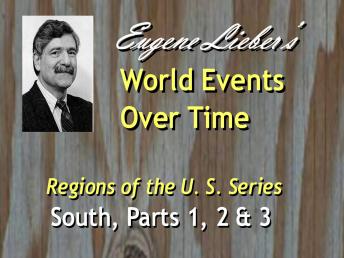 Regions of the U.S. Series: South

Early Settlers. The region is settled by the Indians 1,000 years before European settlers arrive. The climate and terrain are greatly different from the Northeast. Indian tribes are of a range of natures, and generally are thriving. (1.28.008) = The Europeans arrive in 1607, settle Virginia, push for land, and eventually are resisted by the Indians. Charters are granted to the Southern colonies. Maryland is a safe haven for Catholics. Georgia is a safe haven for ex-convicts. (4.23.00) = Indentured Servants. Blacks arrive in Jamestown in 1619 from West Africa or England as indentured servants who are free to farm their own land after obligations are satisfied. Chattel labor comes later. The desire for land in the colonies is unlimited. The minority elite whites fear an alliance of white and black indentured servants, and eventually drive a wedge between them by passing laws to differentiate them, until the onset of slavery. (9.26.00) = White Master Class mythology. They develop their own mythology of their origins from upper class English gentry, not from their actual poor beginnings. The lower class whites adapt this same mythology although there is little prospect for their improvement. (11.56.00) = Slavery. Why the South and not the North? Slavery in the South. This is not because of moral issues, but rather the climate and lay of the land. In the North the climate is harsh, the terrain rocky, allows only for small farms where slave labor is impractical. The South's climate and terrain allow for year-around crops of tobacco, rice and indigo, and later, cotton. Slavery becomes crucial for the South. At first is is a "necessary evil." (13.47.00) = The American Revolution. The white Master Class in the South sees independence as a chance to renege on debts to English banks. Politically, this Master Class wants to rule when independent, although there is a belief in freedom stirred by the French Reformation. (17.01.00) = After the American Revolution. America adds land to the Mississippi River. In 1790 the Northwest Ordinance prohibits slavery in the Midwest but is allowed in the Southern territories. The Eli Whitney cotton gin invention changes the South's economy, making cotton king in the South. Now slavery is a "positive good." The white Master Class is intent on the way of life based on slavery in the face of all arguments. (26.50.00) = Slavery. Daily life and work of field slaves is harsh with limited variety of food, sparse clothing, but have some privacy at night. The house slaves dress well, eat leftovers from the master's table, have a higher status than the field slaves. Slaves have leverage in various ways. The Underground Railroad has its limits because escaped blacks cannot blend in with the population as they can in Brazil. (37.27.00) = Religion. At first Christianity is seen as too good for the blacks who bring with them their religion from West Africa. Later, at the beginning of the 19th century, there are increasing conversions to Christianity. Sermons urge acceptance of slavery and control by the Master Class. The plantation slave preacher becomes a leader of revolt at night. Slaves adapt a form of resistance by seeing Moses, who led the slaves out of bondage, as their hero. Protestants condemn slaves to hell as unredeemable. Religion in Brazil sees slaves as human, redeemable. (42.16.00) = The Slave Family. Chattel cannot be family which exists only informally. Marriage by "stepping over the broom." The ever-present fear of separation, and powerless to protect each other. Harsh upbringing of slave children. (47.50.00) = Gender. White women on pedestal. Only men have sexual urges. Women may look elsewhere, seek out black men, with dangerous consequences. White men come to believe stereotypes about black men. (50.28.00) = Resistance. Slaves adapt a form of resistance by seeing Moses, who led the slaves out of bondage, as their hero. Resistance takes the form of breaking of tools, slowdowns, and other sabotage from field hands. The dependence of the white mistress on her nanny offers other indirect opportunities. (54.17.00) = Pre-Civil War Period. Politics are dominated by the South which wins the 3/5 clause value of slaves represented in electoral votes. Until the Civil War, presidents are either weak or overwhelmingly sympathetic to the South. The expansion of U.S. territory by President Polk after the Mexican War, and the Dred Scott decision by the Supreme Court that slaves are chattel and in effect opening all territory not states to slavery. (1.06.41.00) = Growing Sectionalism. The Fugitive Slave Act is a win for the South. The North wins California as a free state. The North is growing faster than the South and is more diversified. The South does not grow enough food for itself. (1.15.51) = The Election of 1860. Abraham Lincoln is elected, leads to the secession crisis and the Civil War. (1.18.01.00) = Was the Civil War Necessary? In economic terms slavery is a dying institution yet the ideological power of slavery on the Southern mind powers a way of life. Lincoln, a unionist, will not let the South secede. (1.25.06.03) = The North wins the war because of its advantages and the South's disadvantages. The North has banks to finance the war, transportation, factories, superior manpower, effective leadership, all lacking in the South. Because cotton is the major crop, the South has insufficient food for its population, ineffective leadership, lack of military unity because of ist doctrine of states' rights, its economy is based on the questionable loyalty of slave labor. In the beginning the South has better generals, is more of a gun culture, and has higher morale, all of which are insufficient in the balance. (1.37.25.25) = Emancipation Proclamation of April 1863 frees slaves in Confederate states where the North has no hold but does not free slaves in areas it does control. Not a single slave is freed, but it has military value because it allows escaped slaves to serve in the Union army. By the end of the war, 1/4 million blacks are under arms.

Post-Civil War 19th Century. Reconstruction. Lasts for 7 years. President Lincoln allows the South's leaders back if they swear loyalty to the Union. After Lincoln's assassination, Andrew Johnson from Tennessee, an overt racist and inept politician, becomes President and follows Lincoln's plan of reconciliation. The Republican Congress have mixed motives: moral, political, economic, and thirst for revenge against the South. (6.27.00) = Fate of the Ex-Slaves. Plantation land is confiscated and divided up among ex-slaves and poor whites as independent small farms. Some temporary alliances between blacks and whites for economic reasons and to achieve education goals for their children. (10.21.00) = The 14th, 15th, and 16th Amendments. This establishes due process protection for all citizens, gives black males the vote (they are expected to vote for Republicans). Blacks enter into the political process and political office. Their record is similar to white political leadership who have political and economic motives mixed with moral ones. Ulysses Grant as President lacks the competence he had shown as military leader. (18.03.00) = The End of Reconstruction. The Compromise of 1877 ends Reconstruction, and federal troops, needed to break strikes in the North and to finish off the Indians in the West, are withdrawn from the South. (23.03.00) = Reemergence of the Master Class. The South promotes Reconstruction as exploitation by the North and the "Gone With The Wind" stereotype of Southern life. Instead, Reconstruction is a valiant experiment which failed because the North forsakes it. (27.29.00) = The Economy. Blacks and poor whites are now sharecroppers who borrow from landlords to lease their land, never to get out of debt and become virtual slaves doomed to perpetual poverty. (29.39.00) = The Populist Party collapses when the candidate it backs, William Jennings Bryan, looses to Republican William McKinley. (33.17.00) = Jim Crow Era. With the collapse of the Populist Party the upper class whites are in control of the one-party South and have no need to woo black voters. The Jim Crow era of segregation begins in 1896 with the Supreme Court decision that separate but equal is constitutional. Segregation becomes a fact in every aspect of life for blacks starting in the late 1890s. (38.39.00) = 20th Century-1st Half. A reign of terror for the blacks in the South continues well into the 20th century. The KKK revives in the1920s as a national phenomenon. The indifference of state government, federal government and the local authorities. Varied motivation for lynching, mutilation, torture of blacks often well planned as public spectacles.

20th Century-1st Half (continued). Depression of the 1930s.. New Deal aid to subsidize farmers, the Agricultural Allotment Act, favors large Southern landowners not the sharecroppers. Other New Deal agencies are a big help. The Tennessee Valley Authority provides flood control, hydroelectric power and jobs to thousands, revitalizing a hopeless area of the country. (4.56.00) = Post World War II Era. Attempts to organize the sharecroppers makes some headway during the Depression. The Taft-Hartley Act of the late 1940s rolls back some labor gains of the 1935 Wagner Act. Business looks to the South as a source of cheap labor. Companies find even cheaper sources of labor outside of the country. (9.22.00) = Birth of the Modern Civil Rights Movement. Jim Crow continues in the post-war era but the modern civil rights movement arises from the jobs that open for blacks and women from the need for labor during the war. Breaking away from sharecropping, blacks migrate from the rural South to the industrial North during the war. Truman integrates the armed services in 1947. (12.56.0) = The 20th Century