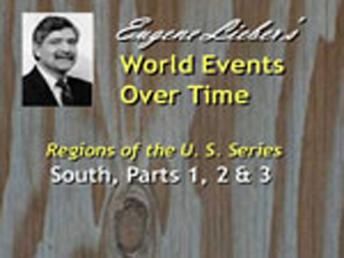 Regions of the U.S. Series: West

The Early Settlers. Native Americans. The earliest migrants to the western hemisphere come from Asian Siberia across a land bridge eventually moving and settling throughout the Western Hemisphere (3.10.00) = In the West. The coastal tribes have a fishing culture. Inland are hunting and agricultural tribes, all adapting to the climate and lay of the land. Against the tendency to romanticize the life of the Indians, they are in reality complex humans, some peaceful, some warlike. Women are dominant in some tribes. There are economic connections between some tribes. Others are migratory. French influence spreads by fur trading. English influence is in Canada. (11.57.00) = The Spanish. The Spanish establish New Spain in Louisiana and migrate northward from Mexico, clash with Indian tribes already here. The power of the Spanish noble class. Spanish Catholicism and the conversion of Indian tribes. Spain makes major inroads from the 1500s to the 1700s. (18.17.00) = The 19th Century-1st Half. Transition. The Lewis and Clark expedition in 1803 and the Louisiana Purchase beyond to the Northwest are incentives for future Western migration. South America, Central America and Mexico are breaking away from harsh Spanish rule. Mexico includes the entire Southwest including California. (21.21.00) = The Slave-Holding South. King Cotton wears out the soil so the South needs more land, spreading slavery. Texas, a province of Mexico, is conducive to Southern crops. Mexico sanctions slavery and welcomes Southern whites as an aid to the development of this Mexican region. (24.04.00) = Texas Becomes Independent. In the 1830s the transplanted Southerners want Texas to be independent from Mexico. After their defeat at the Alamo the Texans win their war with Mexico and form an independent nation of Texas in 1836. (29.10.00) = Annexation of Texas. Under President James Polk Texas is annexed to the U.S. as a slave state. The North approves of the expansion but not the expansion of slavery. (30.57.00) = The Mexican War. Border disputes with Mexico continue, and President Polk declares war on Mexico after provoking a military incident. This is a dirty war which is opposed by Henry Clay and Abraham Lincoln for adding a slave state. The U.S. wins and acquires 1/3 of Mexico including California. The discovery of gold in California in 1849, the Gold Rush, and rapid population of California by small farmers looking for a better life, small business people, and later, blacks fleeing the South. (32.57.00) = Role of Legislation in the West. The 1820 Missouri Compromise creates the dividing line between the North and South for slavery. The Compromise of 1850. California enters as a free state, allows slavery in New Mexico and Arizona but not north of that. Slavery abolished in D.C. The Fugitive Slave Act is passed. (36.44.00) = The 19th Century-2nd Half. The Question of Slavery in the West region not yet states is the key issue. The Republican Party, formed in 1854, opposes expansion of slavery. Homestead farmers going west resist expansion of slavery. They do not want competition from the slave owners, and also for racist reasons. The Dred Scott Decision opens the entire West to slavery. The Kansas-Nebraska Act allows the people of the territories decide to be free or slave. (37.12.00) = The Civil War. The North wins. Slavery is abolished by the 13th Amendment. (37.40.00) = The trek West. Wagon trains, routes laid out. Indian attacks now rare, more likely white outlaws blaming Indians. The most danger is now from disease, especially cholera. Some Indians are helpful, challenging the mythology of the hostility of Indians. The world of nature is hospitable for Indians. Settlers see nature to be used, made into a commodity for extractable industries of oil and mining. (45.44.00) = The Rise of Unions. Mining is the key industry in the Rocky Mountain states, with immigrants from from the East, Far East, and Canada the main labor force. Improved technology, drills versus picks, increases danger. Miners respond with violence. Their attempts to organize unions in the early 20th century is met with violence. (50.01.00) = Role of the Railroads. The western edge of the railroads are built by Chinese laborers who are a despised minority and suffer extreme exploitation. The railroads are initially welcomed by the farmers in the late 19th century. They are granted free land by the federal government, as much as 7-10% of the U.S. land mass, to benefit the national economy, but exploit this to the disadvantage of the small farmers. There is monumental corruption by the merchants. (58.00.00) = Land Use and Violence. The millions of bison in the Great Plains are systematically destroyed. The rise of the cattle ranchers, their need for water, the clash over water rights and land use with farmers. (1.04.50.00) = The Folklore of Violence. The Eastern public romanticizes the history of violence in the West, treating outlaws in the post-Civil War era as folklore. There is racial violence against Chinese laborers, personal violence in the absence of strong public authority. Violence against strikers. In Ludlow, Colorado, strikers are fired upon by vigilantes hired by John D. Rockefeller, resulting in a massacre. (1.08.00) = Women in the West. National suffrage does not come until the 1920s but in the Rocky Mountain states women get the right to vote in state and local elections. (1.11.44.00) = Regional Upheavals. Farmers clash with railroad magnets. Nature is seen as an extractable quantity. Preservation of national parks versus harvesting of valuable timber? Preservation of Yosemite or flooded over by water interests for reservoir? The Colorado River is tapped by various business interest leaving finally just a trickle. (1.12.22.00) = Enforcement of Legislation. The Timber Act prohibits wanton cutting of forests, but owners find ways around it, and smaller loggers are pushed out. The uses and misuses of water continues as an issue today. (1.18.22.00) = The Populist Movement. Movement arises from the Farmers Alliances in 1890s. The farmers thrive during the Civil War, but after demobilization produce sales are reduced. Mining states find silver, call for "free silver," for silver to be combined with gold in currency in a ratio of 15 to 1. Farmers face an increasing urbanized society.