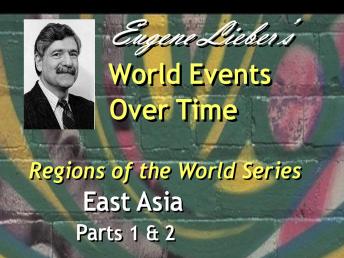 Prelude to the Modern Industrial Age. China. China is the country with the longest continuous history, 7,000 years. The positive and negative effects of its sense of superiority and desire for isolation. Achieves a much higher civilization than Europe in the Middle Ages. How stability and order are promoted by its Buddhist religion and its social class system and is the most powerful country in the world in the 1500s. The absolute power of the Emperor. How Europeans use a Chinese invention to force it to open trade with them in the 1600s. Why China declines as Europe gains. The nature of the Opium Wars as England imposes its power. (8.33.00) = Japan. Japan, though adapting China's religion, calligraphy and art forms, is also isolated, mainly by its geography. How Japan's large population, limited natural resources its Samurai Warrior tradition, and Shintoism, the deification of the Emperor, set it on a course of conquest. A strong resistance to the outside world in the 1600s when Japan throws out all foreigners. Later there is renewed contact with the outside world, and enormous changes in the 1800s. (11.05.00) = The Late 18th-19th Century. China. Attraction of China as a vast market for Europe's increased industrialization. Too large for direct takeover, spheres of influence are staked out by European powers for economic control and exploitation. China is humiliated by many European practices on its soil. Resistance by the Chinese. The defeat of Boxer Rebellion at the end of the 19th century. (15.53.004) = Japan. U.S. Admiral Perry's gun ships forcefully opens Japanese trade in 1864, also causing Japan to recognize its need to modernize. Although resisted by traditionalists, Japan comes to terms with modernity, with all its implications, negative and positive. Japan becomes a significant power by the late 1800s. How European countries anger and frustrate Japan by blocking its fruits of victory in its wars with China in 1880s and with Russia in 1905. On a wave of nationalism and expansionism, Japan occupies Korea, which resists but also sees Japan as a path to modernization. (25.10,00) = The Early 20th Century. Philippines. .U.S. sees the Philippine Islands, gained in the Spanish-American War, as a stepping stone to Asia, and especially China. Philippine resistance to American control continues for years and is brutally put down by the U.S. (27.42.00) = Vietnam. Resists domination by China. Later Vietnam resists French control and economic exploitation which is carried out with harsh methods. After World War I, Wilson calls for self-determination but colonial empires are excluded. The rise of Vietnamese nationalism with Ho Chi Minh leading a Vietnamese communist party. (30.58.00) = China. The fall of the last dynasty in 1911 and establishment of a republic. Sun Yat-sen wants to democratize and modernize, and be independent of American control. Has cordial relations with Bolsheviks in Russia. War lords still control large regions of China. The Communist Party is created in 1921. Russia advises it to cooperate with the ruling Kuomintang Party, with disastrous results for the communists. Chang Kai Check suppresses the Communist Party which survives by fleeing to the interior. (39.36.00) = Japan. In the 1920s - 1930s, with its growth, modernization, industrialized militarism, Japan has become expansionist. Its Samurai tradition is its version of fascism, and allies itself with the Axis. With its eyes on China to satisfy its material needs, Japan invades Manchuria in 1931, and launches a brutal all-out war on China in 1937. (42.35.00) = The Mid-20th Century. China. Mao leads the Communist remnants on a one-year, 6,000 mile "Long March" north to a safe haven. They develop a positive relationship with the peasants by strictly enforcing a close and respectful participation in their lives. A cease-fire is arranged between Mao and Chang to combine against the invaders. Later there are the issues of who fought the better fight against the Japanese, and the corruption of Chiang. (48.56.00) = Japan. The attack on Pearl Harbor and Japan's formidable military force with its major conquests of World War II in the South Pacific and the building of its East Asia empire. The resistance of China. Vietnam (Indo-China) fights a guerilla war and has a friendly relationship with the U.S. The U.S. island-hopping war. The tide turns and U.S. forces approach Japan in 1945.

The Mid-20th Century. (continued). Japan: (continued). The controversy of America's reason for using the atomic bomb it against the Japanese population. The issue of the role of the Emperor's fate in this. (0.41.00) = Post-World War II Effects on East Asia. The Philippines. The "Communist" insurrection takes years to put down. Vietnam (2.54.00) = Japan. The American occupation, and the Westernization of its institutions. The Emperor remains but with limited power. Japan allies with the U.S. in the Cold War and rebuilds itself. The contrast between U.S. which continues as a capital-intensive war-time economy and Japan's peacetime labor-intensive economy because its defense is secured by the U.S. Japan becomes a significant world economic power. Its need to import and export and its need for materials remains an ongoing problem, creating pressure to build up its military might. (9.30.00) = Korea. Experiences pressure to modernize. At the end of World War II, Korea is divided at the 38th parallel. Russia occupies the North. The U.S. occupies the South and installs Syngman Rhee, a wartime collaborator, as leader. There are many incursions from both sides across border between 1945 and 1950, but in 1950 North Korea succeeds in taking most of South Korea. The U.S. intervenes with McArthur's Inchon landing, and pushes the North Korean forces back to the 38th parallel. Instead of ending the war the U.S. wants to unite the country and. pushes north. Why the Chinese warnings that they will intervene as U.S. troops advance toward its border are ignored. The Chinese do intervene creating a major war with high U.S. casualties, and ends in 1953 with an armistice. The evidence that this is a civil war and that Russia is not behind it. The contrast between South Korea's current relative prosperity, increasingly dictatorial and corrupt, and North Korea's very harsh society with many economic woes and whose leader is deified. Tensions remain, with the hope that increasing contacts and communications will have a positive effect. (20.24.00) = Vietnam. Ho Chi Minh declares Vietnam an independent republic, calling itself communist although it is basically nationalist. France wants to restore its empire. It becomes America's proxy in resisting any "communist" factions in that region. U.S. supports France militarily in its brutal war until 1954 when France is defeated. The U.S. refuses to lose this area to the Communists and creates the fiction of a North and South Vietnam around the 17th parallel. We provide military supplies but President Eisenhower refuses to send troops. President Kennedy sends troops as "advisors" in 1961. American opinion turns against the war as President Johnson and then President Nixon insist on a favorable outcome. After a devastating and expanded war the South Korean army quickly collapses in 1975 after the U. S. withdraws its forces. Restoring and rebuilding the country will take generations. The lessons learned and forgotten by Americans.. (32.03.00) = Philippines. The country, America's gateway to China, fights to be free from U.S. control after Spain's control is ended by the Spanish-American War. In World War II, the U.S. reclaims it from the Japanese. The U.S. promises the Philippines independence but a Communist insurgency fights against American control. When it gains independence its leaders become corrupt and ruthlessly dictatorial. This is acceptable to the U.S. so long as the country remains anti-Communist during the Cold War. Recent leadership changes show some opening to democratic processes, but some not. Insurgencies continue under Communist, Maoist, and Muslim labels. (34.50.00) = Indonesia. This East Indies part of the Dutch Colonial Empire gets its independence after World War II. It goes in the direction of a military dictatorship. The resistance of one island under its control is put down by brutal massacres. The U.S. ignores this to maintain its Cold War alliance. Indonesia is heavily populated, has important resources, and is unstable in many ways. (35.57.00) = China. After World War II the civil war resumes until the Communist victory in 1949. Chiang's corrupt and dictatorial government flees to Taiwan. The U.S. recognizes Taiwan as China for the next 25 years, incredibly ignoring the most populated country in the world. At that point China is backward and devastated by civil war and the Japanese invasion. The Korean War comes 1 year after taking power. The Communists are a harsh dictatorial government. Early successes in literacy, health, medicine, and food production. Lack of technology and machinery, and so, emphasis on sheer manpower. Clash between maintaining revolutionary fervor and economic development. Deification of Mao and his disruption of economic progress. The forced movement of rural labor to city factories and its impact on personal lives. Mao makes peace with the U.S. in 1973, opening China diplomatically and economically to Western capitalism. After Mao dies in 1976, the forces for economic development win out. The revolutionary fervor is all but gone. China remains Communist in lexicon only, rapidly developing into a capitalist country. The peasants, an element of cheap labor exploited in the cities and valuable to the West, do not share in modernity. There is a growing inequality in a dictatorial society. An expression of revolutionary ideals by the young in Tiananmen Square is put down with extreme ferocity as the government feels threatened. China is rapidly developing as a world power. Revolutionary ideals all but gone. Growing inequality and exploitation. Terrible environmental consequences in its rapid growth. The nature of China's future society and its relation to the outside world remain in doubt.