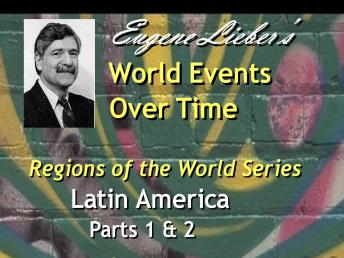 Pre-Columbia Era. Native Americans. About 11,000 years ago they came from Siberia over a land bridge and eventually migrated throughout both continents to the tip of South America. Their remarkable history, mostly of victimization, dates back much before Columbus. There is a tendency to romanticize them, but they have the qualities and faults common to all human experience. (2.46.00) = Mayan Civilization. Their written history starts in 400 BC, deciphered just recently, and tells only about their ruling class, nothing about the lower class. They lack metal, simple machines, the wheel, sail, and work animals, yet they have cities requiring surplus food supply, create irrigation systems and build pyramids for their kings, independent from Egypt's. They also have the concept of the calendar, and mathematics. Their civilization peaks between 200-700 AD. Their decline is partly due to limited nutrition, with corn as their staple, and are further debilitated by ruinous warfare within a divided kingdom, long before arrival of the Europeans. (13.26.00) = Incan Civilization. Located in what is now Peru, it formerly occupies half of South America. An amazing degree of development though they have no writing, no art, using only human muscle power to build cities high in the Andes. Their buildings of stones are fitted perfectly without mortar. They create terraced farming, irrigation, build bridges of grass able to bear great weight. They know the art of mummification. They successfully practice brain surgery. The wonder of images hundreds of feet in size on the ground which can be scanned from the air. They are a conquering empire, yet are conquered by Pizarro from Spain with a small army (23.36.00) = Europe In the New World. Arrival of Columbus. He never knows where he is geographically. He destroys native populations in brutal manner. His voyage opens travel to the New World, changing it forever, a disaster to Native Americans while a gain for Europeans. By the end of the 1500s 90% of native population is wiped out, with intentionality added to lack of resistance to newly introduced diseases. (31.48.00) = The slave trade. Resistance to slavery by Native Americans leads to the Atlantic slave trade from Africa, with Brazil as the heart of it, controlled by Portugal. European demand for sugar. The debate about the difference between the Catholic versus the Protestant view of slavery and treatment of African slaves in North America compared to South America, and the factors involved. The need not to idealize Native Americans who have class differences among them related to color. The rise of commercial agriculture and the further growth of slavery. (48.45.00) = The 19th Century. The end of slavery. At the beginning of the 19th century the Spanish and Portuguese empires decline and the ideals of the French Revolution carries over to Latin America, leading to establishment of republics in Brazil and Argentina. Public education improves but most economic and social structures remain in place with classes and exploitation of the lower classes. Some land reform but question of control results in a native aristocracy. (53.23.00) = Political change 1820-1870. The strong man in military office comes to power, accompanied by much violence. The distorted undiversified economy is vulnerable to fluctuations of European market for these 1 or 2 products. The life of women improves, the church declines. Continued struggles between reform and business interests in Latin American countries. (1.05.08.00) = Cuba. Prelude to Spanish-American War in 1898 is U.S. ultimatum to Spain to bring economic order to Cuba by either giving it independence or by crushing its revolt, or U.S. will solve it. The is the beginning of the U.S. Empire. After the war, Cuba is nominally independent but the U.S. calls the economic shots.

The 20th Century. One aspect is "dollar diplomacy" based on economic needs in the foreign country. Another aspect is "gunboat diplomacy" helping countries put down uprisings which are deemed against the U.S. interests. This continues for most of the 20th century, including Haiti, Nicaragua, Honduras, Guatemala, Venezuela, Columbia (Panama Canal). (14.59.00) = Mexico. Mexico gains independence from Spain in early 19th century. The land reform issue. The unpredictability of complex varieties of political factions. The contentious intervention by the moralistic President Wilson in 1913. The Revolutionary Party of Mexico comes to power and has long rule. There is some land reform in the 1930s and 1940s but the Mexican elite remain allied with the American elite. (25.38.00) = Reform and Dictatorship. Some countries find a balance between dictatorship and reform. In Argentina, strong-man Juan Peron forms alliance with labor, placates the elite, fosters modern capitalism, yet is an admirer of Nazi Germany. During FDR's "New Deal," U.S. implements its "Good Neighbor" policy but is more rhetoric than reality, with a continuation of "gunboat diplomacy." (34.53) = Cuba. After the 1898 Spanish-American War, Cuba has political not economic independence. The Batista dictatorship. Havana becomes an open city. Revolutionary upheaval. Castro, a nationalist aiming to overthrow an unpopular dictator, is not a Communist and is not supported by the Cuban Communist Party. Castro is charismatic, comes to power on January 1, 1959. His pluses: land reform, income redistribution, education reform, food distribution, health care achievements. The initial revolutionary ideals become a dictatorship. Cuba is seen as threat to business interests. U.S. attempt to overthrow ends in Bay of Pigs disaster. U.S. imposes economic boycott and continues efforts to subvert. Aided by Russia, Cuba becomes an echo of Russia. Castro identifies himself as Communist. The Missile Crisis. (53.12.00) = Effect of The Cuban Revolution. It encourages revolutionary activity in Latin America. The U.S. supports most right-wing military dictators. Military aid by U.S. includes training of torture techniques, known as "interrogation methods" at an army base in Georgia. The episodes of President Allende's assassination in Chile, and the Contras in Nicaragua, as examples of continued U.S. "gunboat diplomacy." (1.03.41.00) = The Role of the Catholic Church. Normally expected to be hostile to revolutionary movements, but significant segments of the Catholic Church show support for the underclass, acting on a human view of the message of early Jesus, liberation theology (1.06.32.00) = The 21st Century. Left direction of civilian leadership. Hostility or skepticism of U.S. policy. More inclined toward democracy, land use reform in Chile and Brazil. Limitations of debt burden lead to compromises and dissatisfaction (1.11.28.00) = Nature of Latin American economy. Export economy in Brazil with 1 or 2 major products has dire consequences. Peasants are driven from land for the export crops, move to shantytowns around cities. Depletion of Brazil's rain forest has wide environmental impact. A more favorable product would be rubber from rubber trees, a renewable product. The question in economic development is how much, how little; benefit versus environmental impact. In Venezuela, strong-man Hugo Chavez is using oil revenues to help the poor. Controlling that oil makes him the enemy of the U.S. and U.S. business interests. (1.17.53.00) = Future of Latin America. This is an open question. There is the fall of many dictatorships and increase of democratic rule and reform. Yet, there remains the military legacy, the role of U.S. policy, and the heavy debt burden. Latin America has a remarkable and varied history.