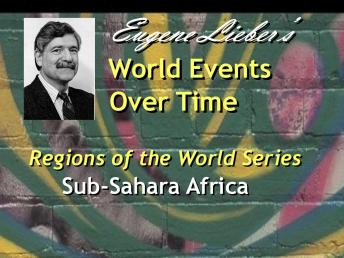 The Beginning. Ancient and Medieval Africa. Humans originate in central Africa. The meaning of the term, "race," and the factor of skin color as it relates to the geography of the sun's rays. The Sahara desert as a barrier and the 5,000 mile Nile which breaks that barrier, linking Egypt and sub-Sahara Africa. The false image of Africa as dark, backward. Ancient African civilizations are characterized by achievement, stability, wealth, and power. The Kush in Sudan (700 BC-300 AD). Ghana (300-700 AD), much larger in this period, derived its great wealth from mining gold and salt. The Empire of Mali (1200-1400s AD), also much larger in this period, becomes Muslim, and in turn, is overcome by Muslim Sungai (1400-1500s AD), known for its city of Timbuktu, a major academic center. The Sungai are subdued in the 1500s by the Christians with advanced weapons. In Ashanti society the leader is responsible for the public good. (15.01.00) = Tribal Sub-Sahara Africa The Impact of European contact. The Europeans promote the view that they are advanced; the Africans are backward. How this plays out as a pattern in gender status, attitudes toward children, the nature of the family, the character of language, the structure of music, the senses appealed to by art, the fabric of daily life, the nature and value of work, attitudes toward the marketplace, and religious precepts and practices. (29.50.00) = Destabilization. The Slave Trade. .The resistance by Native Americans in the Western Hemisphere to slavery and its impact on the slave trade in West Africa. The nature of pre-existing slavery in Africa compared to the European slave trade. The compelling motivations for tribal chiefs' to participate in the European slave trade. The devastating impact of the 300 year slave trade on West Africa then and up to the present. Why "Middle Passage" across the Atlantic is a terrifying experience for the slaves. England ends its slave trade in the beginning of the 1800s and the U.S. after the Civil War. Only 10 years later the European onslaught in sub-Sahara Africa continues in a new form. (45.35.00) = Modern Economic Imperialism. . European countries divide up Africa by military force to secure materials and markets for its industrial products. The notion that they are bringing civilization to Africa is questioned. A theory about what underlies England's and others' powerful contempt for black Africans. The sharp contrast between English way of life and traditional African way of life. Why minerals are exploited, but not food. The fabric of the tribe is broken as men are taken to work in distant mines, causing an enforced dependency on its colonial master. African societies begin to ape European ways including patriarchal social structure, dog-eat-dog interactions, and corruption. (57.26.00) = England. The British are capable of great brutalities, gain enormous power in Africa. They educate a native upper class bureaucracy, including India, to buffer their rule. The Zulu War is an example of resistance to the British but is crushed by modern weaponry. (1.00.27.00) = Belgium. King Leopold treats the Congo as his own personal land. He milks the country of its resources, is extremely brutal, provides no semblance of benefits. This continues after his death. (1.07.14.00) = Independence and the Neo-Colonial Period. Weakening of the Colonial Powers. After World War I, the Colonial powers are weakened but hold onto their colonies. Further weakened by World War II, they begin to lose control. Independent nations begin to emerge in the 1950s and 1960s, but neo-colonialism, the legacy of European imperialism, emerges, with economies controlled by outside countries. (1.10.38.00) = Congo. Becomes independent. Belgium leaves but maintains economic control using native rulers who are corrupt and will do business with them. Patrice Lemumba, a more independent leader, is assassinated. (1.13.04.00) = Nigeria. Boundaries created to benefit England's colonial exploitation of resources combines tribes hostile to each other. This leads to later chaos and violence. (1.14.47.00) = Angola. Formerly part of the Portuguese Empire, with significant natural resources. A current leftist government wants to control its own economy. Perpetual civil war, fostered by outside powers, diverts it from this objective. The insidious use of land mines.. (1.7.24.00) = South Africa History of British control, the Zulu Wars. The wealth of diamonds, gold and other materials. Arrival of Dutch settlers, the Afrikaners, who compete with the British and are defeated in the Boar War at the end of the 19th century. The British leave later. The Afrikaners become the dominant force, introduce apartheid where 4 million whites dominate 20 million blacks. The blacks become a permanent underclass and are suppressed brutally. Under the leadership of Nelson Mandela a bloodbath is averted. The Afrikaner president, De Clerk, agrees to free elections. White flight is avoided by Mandela's Commission of Reconciliation which offers an amazing sense of forgiveness. At present, there is still need for much economic development, and its future remains uncertain. (1.26.12.00) = Future prospects. . Some countries become partly democratic, others not. Growth of dictatorships, corruption following one-person rule. Hostility of ethnic tribes erupts in horrible violence. Modern life changes result in devastating health problems, with a bleak outlook. Major economic issues remain. Continued foreign control in collusion with corrupt local officials. Raw materials are still the basis of economies, restricting development of finished goods, and maintaining economic distortion. The effect of the U.S. supporting military leaders during the Cold War and current war on terror. Civil wars rage on, fueled by abundance of weapons from outside powers, while the world largely looks on. The future of sub-Sahara Africa is not bright. It has not fulfilled the hopes and dreams of its people.