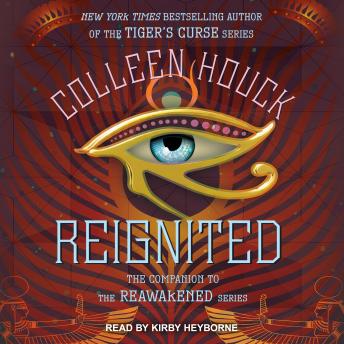 Reignited: A Companion to the Reawakened Series

Before Lily and Amon met, before the cosmos were in chaos and needed three brave brothers to fight off evil, there were four siblings who helped rule the earth.

Each sibling had a special gift. Osiris, the god of agriculture, helped mortals to grow and thrive in their natural environment. Isis, the goddess of creation, fostered health and wellness. Nephthys, the seer, was able to keep the balance between all living beings and the universe. But Seth, the youngest sibling, was left without any special powers. The Waters of Chaos, which granted each god's talent, were running dry, and Seth was paying the price.

As time passed, however, Seth's determination and willfulness resulted in a very special gift, one that should have granted him the ability to enact wondrous change. But Seth's competitive childhood gave him a heart so cold and vacant that instead, his gift brought about great evil.

Seth was now the god of unmaking, the creator of disorder and destruction. And he was ready to seek his revenge, dominating all who got in his way.

Reignited: A Companion to the Reawakened Series