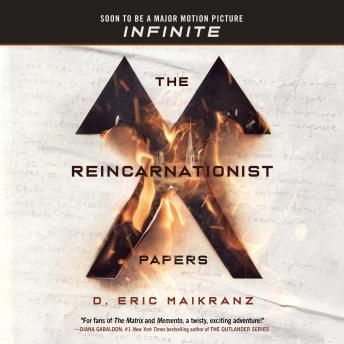 #1 of The Reincarnationist Papers Series

“For fans of The Matrix and Memento, a twisty, exciting adventure!”—Diana Gabaldon, #1 New York Times bestselling author of the Outlander series

The basis for the major motion picture Infinite

Discovered as three notebooks in an antique store in Rome at the turn of the millennium, The Reincarnationist Papers offers a tantalizing glimpse into the Cognomina, a secret society of people who possess total recall of their past lives.

Evan Michaels struggles with being different, with having the complete memories of two other people who lived sequentially before him. He fights loneliness and believes he is unique until he meets Poppy. She recognizes his struggle because she is like him, except that she is much older, remembering seven consecutive lives. But there is something else she must share with Evan—she is a member of the secretive Cognomina. They are, in effect, immortals—compiling experiences and skills over lifetimes into near superhuman abilities that they have used to drive history over centuries.

Poppy invites Evan into the Cognomina, but he must face their tests before entering this mysterious society as their equal.

this was a surprisingly enjoyable read I mean I enjoyed the history the philosophy the time traveling storytelling it was exceedingly well written and filled with richness. I really could have done without sex scenes they cheapen the whole work and are completely unnecessary thankfully there's only a couple.

This book was great! I finished the audiobook in two days! It had me intrigued!!

History philosophy religion, colors were woven together to create a most joyful read

Absolutely loved the book. It reminded me a lot of Umberto Eco's books full of philosophy, semiology, and secret societies or conspiracy theories. To me it's the perfect genre, and a book that's going to keep anyone interested in history, philosophy, and religion intrigued until the very end!

This was an excellent read. A fascinating concept with lots of philosophical and moral consideration tucked inside a variety of wonderful story lines.