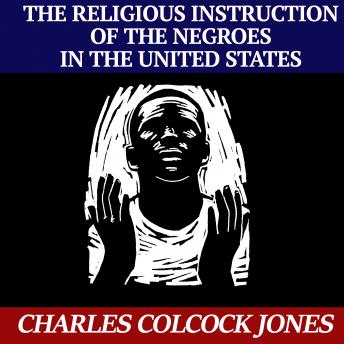 The Religious Instruction of the Negroes in the United States

Charles Colcock Jones, Sr. (1804-1863) was a Presbyterian clergyman, educator, missionary, and planter of Liberty County, Georgia. While in the North, Jones agonized over the morality of owning slaves, but he returned to Liberty County to become a planter and a missionary to slaves. He served as pastor of the First Presbyterian Church of Savannah, Georgia (1831-32), professor of church history and polity at Columbia Theological Seminary, Columbia, South Carolina, (1835-38), returned to missionary work in 1839, and was again Professor at Columbia Seminary (1847-50). He spent the remainder of his life supervising his three plantations, Arcadia, Montevideo, and Maybank, while continuing his evangelization of slaves.

Besides many tracts and papers, Jones published The Religious Instruction of the Negroes in the United States (1842) and a History of the Church of God (1867). His Catechism of Scripture Doctrine and Practice (1837) was translated into Armenian and Chinese. In 1972, literary critic Robert Manson Myers published a huge collection of Jones family letters in The Children of Pride, a work of more than 1,800 pages. The book won a National Book Award (1973). In 2005, historian Erskine Clarke published Dwelling Place: A Plantation Epic based on an even larger collection of Jones family correspondence. It won a Bancroft Prize (2006).

Religious Instruction of the Negroes in the United States

This title is due for release on May 5, 2019
We'll send you an email as soon as it is available!