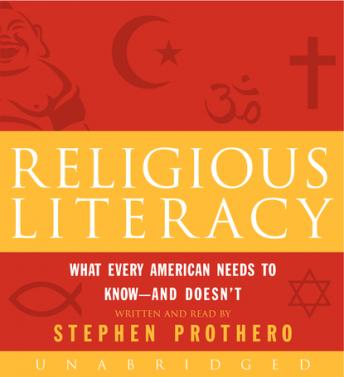 
- Name the four Gospels?
- Name a sacred text of Hinduism?
- Name the holy book of Islam?
- Name the first five books of the Hebrew Bible or the Christian Old Testament?Name the Ten Commandments?
- Name the Four Noble Truths of Buddhism?

If you can't, you're not alone. We are a religiously illiterate nation, yet despite this lack of knowledge, politicians continue to root public policy arguments in religious rhetoric whose meanings are missed—or misinterpreted—by the vast majority of Americans.

'We have a major civics education problem today,' says religion scholar Stephen Prothero. He makes the provocative case that to remedy this, we should return to teaching religion in the public schools.

Alongside 'reading, writing, and arithmetic,' religion ought to become the fourth 'R' of American education. Many believe that America's descent into religious illiteracy was the doing of activist judges and secularists hell-bent on banishing religion from the public square. Prothero reveals that this is a profound misunderstanding. 'In one of the great ironies of American religious history,' Prothero writes, 'it was the nation's most fervent people of faith who steered us down the road to religious illiteracy. Just how that happened is one of the stories this audio has to tell.' Religious Literacy reveals what every American needs to know in order to confront the domestic and foreign challenges facing this country today.