The Renaissance: A Very Short Introduction 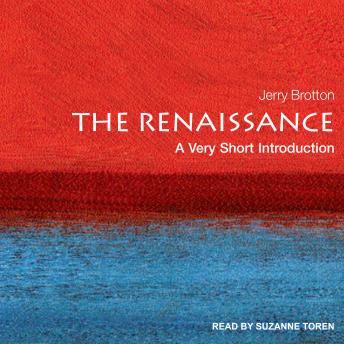 More than ever before, the Renaissance stands out as one of the defining moments in world history. Between 1400 and 1600, European perceptions of society, culture, politics, and even humanity itself emerged in ways that continue to affect not only Europe but the entire world.


In this wide-ranging exploration of the Renaissance, Jerry Brotton shows the period as a time of unprecedented intellectual excitement, cultural experimentation, and interaction on a global scale, alongside a darker side of religion, intolerance, slavery, and massive inequality of wealth and status. Brotton skillfully guides us through the key issues that defined the Renaissance period, from its art, architecture, and literature, to advancements in the fields of science, trade, and travel. In its incisive account of the complexities of the political and religious upheavals of the period, the book argues that there are significant parallels between the Renaissance and our own era. This is the first clear and concise account of the Renaissance as a global phenomenon, an important new vision of the Renaissance for the twenty-first century written by a young Renaissance scholar of a new generation.