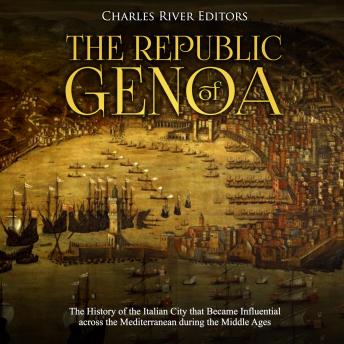 The Republic of Genoa: The History of the Italian City that Became Influential across the Mediterranean during the Middle Ages

"Legislators, therefore, ought not to trust the future government of a state entirely to chance, but ought to provide a system of laws to regulate the administration of public affairs. Effects will always correspond to causes; and wise regulations in any commonwealth are the most valuable legacy that can be left to future ages. In the smallest court or office, the stated forms and methods, by which business must be conducted, are found to be a considerable check on the natural depravity of mankind. Why should not the case be the same in public affairs? Can we ascribe the stability and wisdom of the Venetian government, through so many ages, to any thing but the form of government? And is it not easy to point out those defects in the original constitution, which produced the tumultuous governments of Athens and Rome, and ended at last in the ruin of these two famous republics? And so little dependance has this affair on the humours and education of particular men, that one part of the same republic may be wisely conducted, and another weakly, by the same men, merely on account of the difference of the forms and institutions, by which these parts are regulated. Historians inform us that this was actually the case of Genoa. For while the state was always full of sedition, and tumult, and disorder, the bank of St. George, which had become a considerable part of the people, was conducted, for several ages, with the utmost integrity and wisdom." - David Hume
In a country that is as crowded with famous cities as Italy, Genoa is usually not one that first leaps to mind, at least for an English-speaking audience. If Venice, Florence, and Rome are the top three, they are often followed by Pisa, Sienna, and Naples, not to mention the islands of Sardinia and Sicily. Indeed, Genoa would come towards the end of a much longer list, and it might be most closely associated with its famous native son, Christopher Columbus, who ultimately sailed for Spain. For avid tourists, Genoa might be the port of call for those wishing to visit the stunning Cinque Terre on the Ligurian coast nearby, and for an expert in world politics, the city of Genoa might recall the memories of the tragic events of the 27th G8 summit in July 2001, when, at the height of the anti-globalization movement, protests turned violent and resulted in the death of a 23-year-old Carlo Giuliani. In today's news, Genoa might represent Italy's crumbling infrastructure and the apparent powerlessness of its government to repair it - on Tuesday, August 14, 2018, one of the main bridges of the city, the Morandi Bridge, collapsed, killing 43 people and leaving 600 homeless. The bridge's demise also destroyed Italy's reputation as an expert in mechanical engineering.
Although Genoa cannot compete in the popular imagination with some of Italy's more famous cities, this busy port town perched above the sea once boasted a powerful empire that rivaled that of Venice. It also lasted for roughly the same time period, rising in the early Middle Ages and coming to an end at the hands of Napoleon Bonaparte near the end of the 18th century. Beyond its own success, the city's position at the head of the Mediterranean gave it an important strategic location from which to observe Italian and European history, as well as the world beyond. Today, historians are starting to correct the imbalance that has focused on Venice, Florence and Rome, and new histories are gradually introducing Genoa to the world, even as much remains to be uncovered.
The Republic of Genoa: The History of the Italian City that Became Influential across the Mediterranean during the Middle Ages examines the highs and lows of Genoa La Superba ("The Proud"), including its humble origins in the 1st century CE, its felicitous rise after the fall of the Roman Empire, its golden age as a mercantile power during the "Genoese Cent

Republic of Genoa: The History of the Italian City that Became Influential across the Mediterranean during the Middle Ages