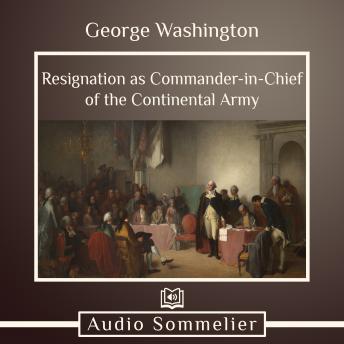 Resignation as Commander-in-Chief of the Continental Army

After the Treaty of Paris officially ended the Revolutionary War, Washington resigned from his position as leader of the Continental Army. By the end of the war, Washington held enough power and influence to establish himself as king or even dictator over the new nation. Instead, he left the same way he entered: with humility, leaving way for independence to flourish. He stated, "Happy in the confirmation of our Independence and Sovereignty, and pleased with the opportunity afforded the United States of becoming a respectable Nation, I resign with satisfaction the Appointment I accepted with diffidence."

Resignation as Commander-in-Chief of the Continental Army